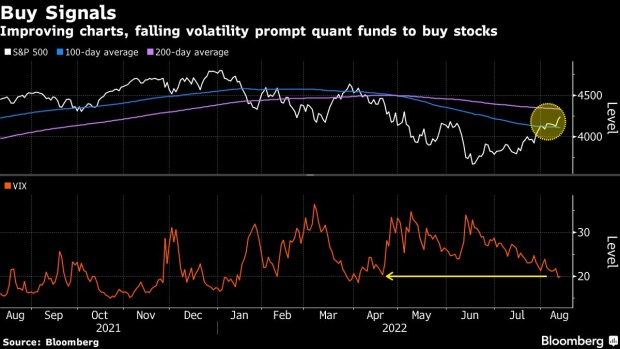 A pedestrian outside the New York Stock Exchange (NYSE) in New York, US, on Monday, July 18, 2022. US stocks fell amid a drop in big tech as investors assessed the outlook for corporate profits and risks to economic growth as central banks hike interest rates to combat runaway inflation. Photographer: Jonathan Alpeyrie/Bloomberg , Bloomberg

(Bloomberg) -- Equity skeptics obsessed with everything from inflation to pie-in-the-sky earnings estimates have managed to miss a $5 trillion rally being amplified by trends in investor positioning. More pain may be in store for bears should certain signals keep flashing in quant-land.

The issue is the giant pool of systematic funds that moves in and out of the market based on how turbulent prices are. With peace at hand of late amid a four-week rally, so-called volatility-target funds and similar strategies such as risk parity are buying between $2 billion to $4 billion of stocks per day, according to an estimate by JPMorgan Chase & Co. analyst Kate Gandolfo.

“That can last perhaps another 100 days if volatility stays low,” Gandolfo wrote in a note, adding options dealers are currently stuck in “long gamma” positions that leave them needing to go against the prevailing equity trend to maintain a neutral market exposure. “Vol could stay contained/supportive of the market.”

Vol-target funds are not the only force that bears have to worry about. Trend-following funds such as commodity trading advisers have also added fuel to the latest rally by unwinding their short positions while indexes such as the S&P 500 reclaimed key trendlines like the 100-day average. By JPMorgan’s estimate, CTAs could snap up as much as $200 billion of stocks if the market stays buoyant.

Such is the conundrum that stock naysayers are facing. From hedge funds to mutual funds, many investors slashed their equity exposure to the lowest since the global financial crisis after the S&P 500’s worst first-half in five decades. Sentiment soured amid concern that the Federal Reserve’s aggressive rate hikes would thrust the economy into a recession.

With positioning cut to the bone, even the slight good news has shown the ability to spark a big bounce. That’s what happened Wednesday, when cooler-than-expected inflation triggered a 2% jump in the S&P 500 even as two Fed officials warned that the central bank was a long way from ending its tightening cycle, let alone reversing it.

“The machines seem hell bent on pushing the financial conditions easing trade,” said Dennis DeBusschere, the founder of 22V Research. “Machines are eating the words from the Fed speakers for breakfast.”

The S&P 500 gave up gains in the final 90 minutes of trading Thursday and lost 0.1% to close at 4,207.27. The Cboe Volatility Index, or VIX, on Wednesday fell below 20 -- its average level since inception -- for the first time since April. It’s dropped for eight weeks in a row, the longest retreat since early 2019. It hovered near 20 on Thursday.

By JPMorgan’s estimate, the overall exposure by CTAs remains subdued -- in the 15th percentile of its long-term range. The low positioning is in part due to the fact that the S&P 500 still sat below its 200-day average, currently at 4,330.

Moreover, momentum has yet to turn positive over six-month and 12-months horizons. Right now, such buy signals wouldn’t happen until the S&P 500 rose toward 4,400. In that scenario, Gandolfo’s model suggests that CTAs would turn “max long” on stocks, buying probably $100 billion to $200 billion across various trend-following strategies.

But reaching 4,400 is not the only way that would prompt CTAs to step up buying. The way Gandolfo sees it, even if the market just drifts around where it is now, by September signals on six-month and 12-month momentum would flash buy.

“We don’t actually need to go to 4,400, as just if we stay here, eventually these levels will come down. For instance, in September, 12m comes down to 4,300 and 6m comes down to 4,200,” the analyst wrote. “There is a significant upside to their position.”