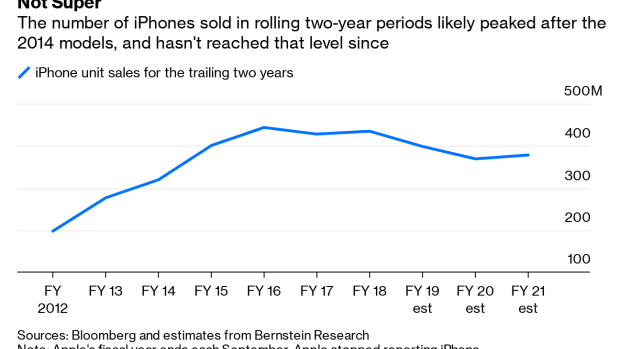 (Bloomberg Opinion) -- “Super cycle” predictions are back. Kind of.

In 2016 and 2017, some technologists and stock analysts said Apple Inc.’s 10th anniversary iPhone line would produce something like the sales surge from the first larger-screen iPhone 6 models that came out in 2014.

It turned out this prediction of a super cycle was wrong, and there was no tidal wave of buyers for the iPhone X line introduced in 2017. The eye-popping $1,000-and-up cost probably held some people back, but that oversized price did help Apple boost revenue during a year in which iPhone unit sales barely budged.

Those wayward predictions make it surprising to see this idea return — albeit in a muted form that shows how times have changed for Apple and the rest of the smartphone industry.

Some on Wall Street are now saying that investors are looking past the lightly updated iPhone models to be unveiled next week and talking about 2020. The theory: Consumers with older smartphones are holding out for what are expected to be the first iPhones that support 5G, a new, faster wireless standard.

I’ll put aside the question of whether 5G will be widely available and stable in a year or whether normal humans care about it. Right now, a handful of tech geeks have bought 5G-capable phones for the giggles of using them in the two square blocks where 5G is operational. Industry research and consulting firm Ovum predicts there will be 720,000 5G mobile subscriptions this year, and about 37 million next year, according to figures cited by Bloomberg Intelligence.

That is not much when you consider the 1.4 billion new smartphones sold each year. A counterpoint: Piper Jaffray published Thursday the results of a survey of 1,050 U.S. iPhone owners that found nearly one-quarter of respondents said they would buy a $1,200 5G iPhone if it’s an option when they’re buying their next smartphone.

The bigger picture, however, is there are no more super cycles in this middle-aged phase of smartphones. The growth is gone. There’s no turning back.

New smartphone sales are on track to decline in 2019 for the third consecutive year, according to researcher IDC. In the biggest smartphone markets, such as China, the U.S. and Europe, a large share of people already own smartphones, and they’re typically waiting longer to replace them — on average more than three years between purchases in the U.S., according to telecom industry consultant Chetan Sharma.

That is weighing down sales of new smartphones, and I find it tough to imagine the trend changing drastically because of 5G or folding smartphones. The simple fact is that, for many people, a smartphone is a boring necessity like a refrigerator. It’s something that gets replaced when it breaks or there’s a big life change. People don’t upgrade a fridge when there’s a new ice-making technology.

So what could change the trajectory of smartphones globally? Out of roughly half the global population that doesn’t use a smartphone, many live in poorer countries with low rates of internet use, and spreading lower-cost devices, data and wireless connectivity into more places could materially change the smartphone industry’s growth.

Nikkei and Bloomberg News were the latest news outlets to report that Apple may introduce a cheaper iPhone in the first half of next year, but reaching the newly internet-connected is not in Apple’s wheelhouse. Other internet, smartphone and e-commerce companies such as Google, Facebook, Xiaomi, Alibaba and Netflix are changing their products and strategies for countries where smartphone use is just starting to take off, or could soon. Apple is almost nowhere on this stuff.

To be fair, not all Apple-watchers are predicting a large number of upgrades resulting from 5G-capable iPhones. And even predictions of a 2020 iPhone super cycle are not very super. Piper Jaffray has estimated iPhone revenue will decline 14% in Apple’s fiscal year ending later this month, inch down 1% in fiscal 2020 and then increase 2% in 2021. For comparison, iPhone revenue surged 52% in the peak year of iPhone 6 mania.

Apple optimists will say that new device sales matter less for a company that is generating a large share of growth from non-iPhone sources such as Apple Watches, AirPods headphones, commissions on app spending, contractual payments from Google, Apple Music subscriptions and a soon-to-launch online video service.

These products, though, are tied closely to the iPhone. If nothing else, selling a new iPhone gives Apple a chance to sell more stuff to that consumer, and UBS has found a correlation between owning a newer iPhone and higher spending on apps. That’s why it will hurt if the super cycle predictions are wrong again.