Hours after unexpectedly forcing out the central bank’s governor, Turkish President Recep Tayyip Erdogan made clear that he expects both the successor and the rest of the establishment to toe the government’s line on monetary policy.

The decision to can Murat Cetinkaya, whose four-year term was due to end in 2020, was announced in the early hours on Saturday following a pause in interest rates that lasted for over nine months. Deputy Governor Murat Uysal was named as a replacement.

During a closed meeting after the decree came out, Erdogan told lawmakers from his ruling party that politicians and bureaucrats all need to get behind his conviction that higher interest rates cause inflation, according to an official who was present. He also threatened consequences for anyone who defies the government’s economic policies, the official said.

“By abruptly dismissing Cetinkaya, Erdogan reminded everyone who is in charge of monetary policy,” said Piotr Matys, a London-based strategist at Rabobank.

Erdogan, who once called himself an “enemy of interest rates,” may be doing Uysal a disservice. Prospects for monetary easing would be complicated if the escalating rhetoric reignites investors’ concern about the central bank’s independence and derails a rally in the lira. 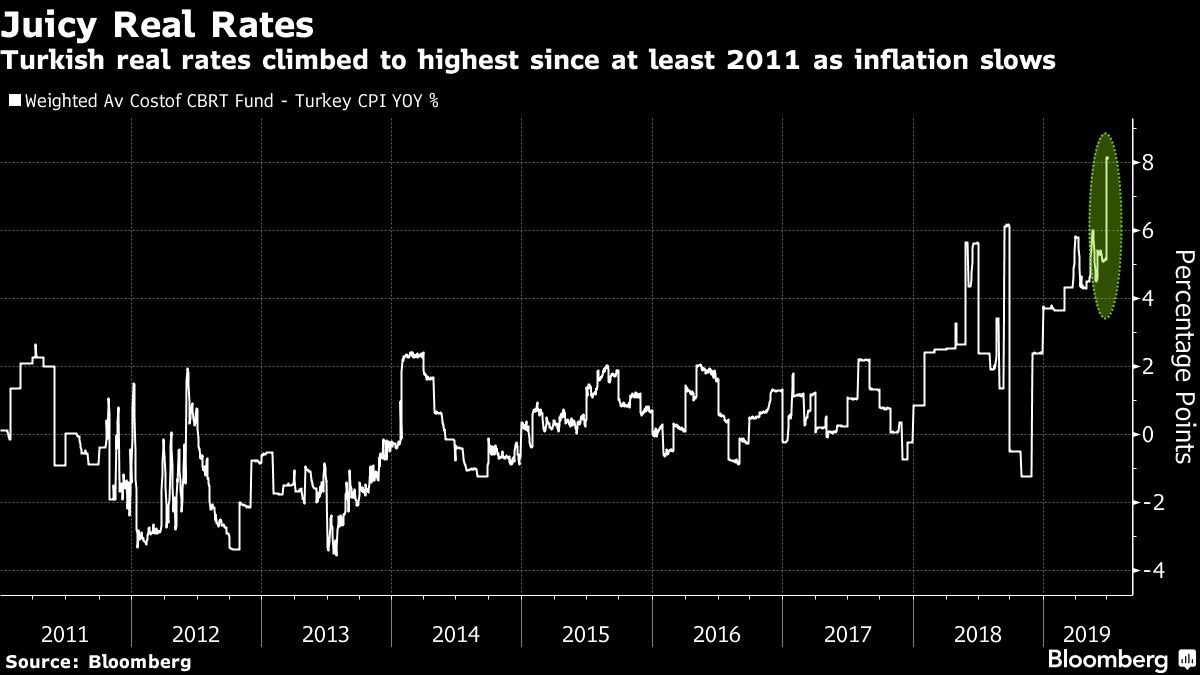 Cetinkaya was ousted after he was said to refuse an informal request to resign. Tension between the former governor and the government worsened after a monetary authority meeting on June 12, when he kept borrowing costs unchanged, according to people familiar with the matter, who asked not to be identified because they aren’t authorized to speak publicly about the matter.

A spokesman for the Treasury and Finance Ministry didn’t answer calls. Text messages and phone calls to officials who work at the president’s office went unanswered.

The president has chastised the central bank frequently for keeping borrowing costs elevated. Last month, he complained that while the U.S. Federal Reserve is moving closer to lowering interest rates, “the policy rate in my country is 24%, this is unacceptable.”

Turkey’s real rate has soared to a world topping 8.3% as inflation slowed more than expected. The next policy decision is scheduled for July 25.

At stake for Erdogan is his standing as the country’s most dominant politician in half a century after his party suffered rare electoral setbacks. As the recession ate into his support among poorer voters, and the central bank staying on hold for months, authorities have instead relied on fiscal stimulus to ride out Turkey’s first recession in a decade.

Erdogan’s decision to remove Cetinkaya underscores the pressure placed on central bank governors worldwide. That includes Fed Chairman Jerome Powell, frequently a target of President Donald Trump, who as recently as Friday said the regulator is “our most difficult problem.”

Agustin Carstens, the general manager of the Bank for International Settlements, said in late June that Turkey is an example of what happens when politicians meddle with monetary policy. Central banks need to “persevere” in following their goals and not be swayed by short-term political goals of decision makers in government, he said.

Erdogan is using the powers granted to his office after last year’s general election, which transformed the political system into an executive presidency. The first batch of presidential decrees issued under the new rules last July included a change that allowed Erdogan to name central bank governors -- an appointment that previously required the support of the cabinet.

Uysal, deputy governor since June 2016, said he would continue to implement monetary policy independently, in line with his mandate and authority. He’ll hold a press conference in the coming days, according to a statement on the central bank’s website.

Cetinkaya, appointed governor in April 2016, was criticized for acting too slowly to tighten monetary policy during a currency rout in August. He then showed resolve in the face of market turmoil, increasing the benchmark interest rate by 625 basis points in September and holding it ever since.

The ouster drew criticism from former central bank officials, who said laws that guarantee the regulator’s independence also make it impossible for the executive branch to remove the governor unless he is involved in prohibited activities, such as holding shares in a commercial lender.