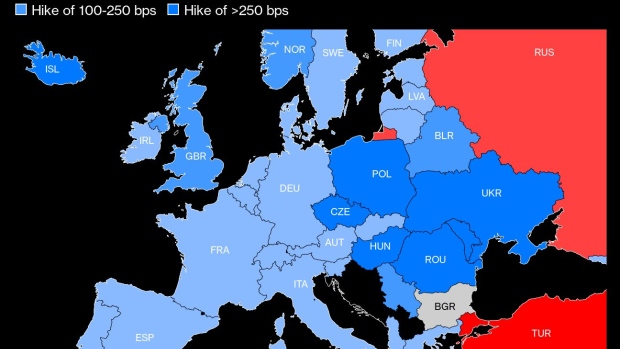 Recep Tayyip Erdogan, Turkey's president, at a meeting on the final day of the North Atlantic Treaty Organization (NATO) summit at the Ifema Congress Center in Madrid, Spain, on Thursday, June 30, 2022. NATO's so-called Strategic Concept said in the text that China's stated ambitions and coercive policies "challenge our interests, security and values" and warned about a deepening strategic partnership between Beijing and Moscow. , Bloomberg

(Bloomberg) -- Two months after Turkish President Recep Tayyip Erdogan promised lower interest rates, the central bank delivered, despite raging inflation and a consensus among economists that it should be raising them instead.

Next up: getting the country’s banks to cut their lending rates, too.

The Monetary Policy Committee led by Governor Sahap Kavcioglu said after cutting its key rate by 100 basis points that it would also “further strengthen the macroprudential policy set” to reinforce its monetary-policy transmission mechanism. And it singled out the widening spread between its own low rate and those offered at private banks.

That’s because there’s been a sharp divergence between the two in recent months, with commercial lenders now charging more than double the central bank’s rate, which had been held at 14% since December until the surprise cut to 13% on Thursday.

Meanwhile, the average rate for commercial loans in liras spiked to 30% in July, the highest in four years.

While it declined slightly amid complaints from businessmen of a finance crunch, it was still at 27% as of Aug. 12, according to official data. Average rates for vehicle loans were 28%, and consumer loan rates have stayed above 30% since last month.

“Probably, the banks will be encouraged through some additional balance sheet restrictions to bring their loan rates closer to the deposit rates,” said Hakan Kara, former chief economist at the central bank and professor of economics at Bilkent University in Ankara.

Boosting the economy through credit is a policy long favored by Erdogan’s government. Following an attempted coup in 2016, it introduced the Credit Guarantee Fund, through which companies could access borrowing backed by the government.

The approach eventually backfired as new credit caused the economy to overheat and contributed to the lira’s crash in August 2018.

Economists say they’re now expecting Turkey’s banking authority, known as the BDDK, to align with the central bank’s low-rates policy by stepping in to pressure commercial lenders for targeted easing.

Doing so will mark a reversal of some of the BDDK’s tightening moves in recent months, such as shortening debt repayment periods for consumer loans and increasing the risk weight to 200% on some commercial loans.

“Macroprudential policies affecting the cost and allocation of credit will be far more important than fiddling with the policy rate by 1% or 2% here or there,” he said.

Juiced by the president’s favored ultra-loose monetary policy, the $800 billion economy blazed ahead as it emerged from the pandemic, and has continued to expand at one of the fastest rates in the Group of 20. But the central bank, in justifying its cut on Thursday, warned of “some loss of momentum in economic activity” at the start of the third quarter.

The abrupt resumption of monetary easing puts the lira, one of the world’s worst performing currencies this year, at risk. The currency weakened as much as 1% against the US dollar after the rate decision -- falling to its lowest since Dec. 20 -- before paring losses.

Turkish policy makers are following through on Erdogan’s determination to lower borrowing costs as much as possible, with less than a year before elections, although price jumps are emerging as a major threat to the Turkish leader’s popularity.

The central bank revised this year’s inflation forecast higher by almost 18 percentage points and now sees year-end inflation at 60%, 12 times the target, with a peak of around 85% expected within months.

“We may well see additional measures to maintain selective credit growth policies, support FX reserve growth, increase demand for lira assets, and divert FX demand in the period ahead,” ING Bank AS analysts including Muhammet Mercan said in a note.