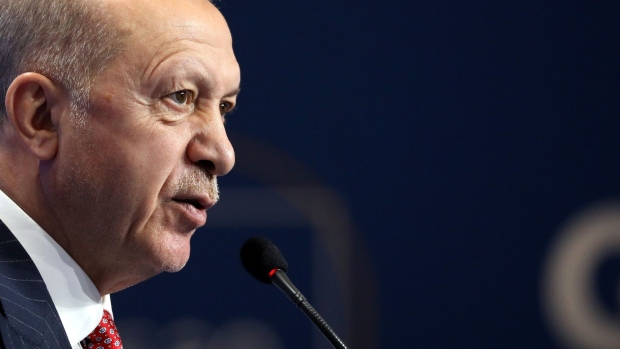 President Recep Tayyip Erdogan has invited Saudi Arabia’s de facto ruler to visit Turkey and hopes to host him in the “coming days,” according to two Turkish officials familiar with the matter, potentially delivering a major boost to bilateral ties as well as Turkey’s deteriorating economy.

Erdogan met with Crown Prince Mohammed bin Salman and his father King Salman bin Abdulaziz in Jeddah about a month ago. The two officials who commented on the plans are directly familiar with Turkish foreign policy.

Saudi Arabia’s Center for International Communication didn’t immediately respond to a request for comment. A visit to Turkey would mark a shift for the crown prince, who hasn’t traveled outside the immediate region for two years.

A rapprochement between the two G-20 economies gained impetus after Turkey ended its trial of suspects in the 2018 killing of Washington Post columnist Jamal Khashoggi by Saudi agents at the kingdom’s consulate in Istanbul and transferred the case to Saudi Arabia in April.

A US intelligence assessment concluded that the Saudi crown prince had likely ordered the operation. The prince has denied any involvement, though he’s said he accepts responsibility for the killing as Saudi Arabia’s de facto ruler.

Erdogan is working to improve ties with the prince and others in the region as he aims to boost trade and lure investment from oil exporters to support the country’s economy. Inflation has surged to a two-decade high of 70%, threatening to strip away support for the longtime Turkish leader and his party ahead of elections scheduled for next year.

The moves are part of a broader realignment that’s seen regional rivals heal rifts and step back from conflicts since US President Joe Biden took office. Turkey’s foreign minister is traveling to Israel this week to advance an improvement in relations.

Economic aid is backing the diplomatic push. In March, Saudi Arabia deposited $5 billion in Egypt’s central bank as part of the kingdom’s effort to continue its support for the government in Cairo. Turkey and the United Arab Emirates signed a $4.9 billion currency swap in January, offering Turkey’s battered lira much-needed support. The UAE has also outlined plans for a $10 billion fund to support investments as it seeks to at least double bilateral trade.

Turkey wants Saudi Arabia to end an unofficial boycott of the country’s goods after shipments to the kingdom slumped in late 2020. Last year, Turkish exports were just over $200 million, down from around $3.2 billion in 2019, according to official Turkish data.