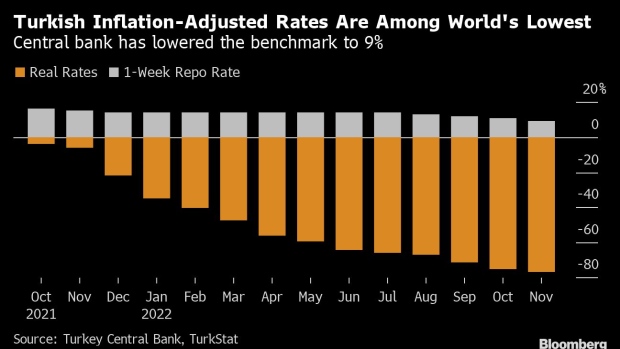 Shoppers at the Wednesday Market, outside the Fatih Mosque, in Istanbul, Turkey on Wednesday, Nov. 16, 2022. Turkey is contending with the worst cost-of-living crisis for decades, with food prices up 99% and energy bills rising by another 20%, all in a country where half the population has to survive on the minimum wage. Photographer: Nicole Tung/Bloomberg , Bloomberg

(Bloomberg) -- Turkish inflation slowed for the first time in over a year and a half, though measures to revive the economy ahead of elections in 2023 may keep it elevated for some time.

Consumer prices rose an annual 84.4% in November, down from 85.5% the previous month, according to data released on Monday. The median forecast of economists surveyed by Bloomberg was 84.8%.

The statistical effect of a high base a year earlier and two months of relative stability in the Turkish currency are starting to help contain cost increases, even as inflation remains near the fastest since 1998. On a monthly basis, prices grew 2.9% in November.

Inflation this year reached the highest level since President Recep Tayyip Erdogan took power almost two decades ago after Turkey embarked on policies that prioritized economic growth and cheap lending at the expense of the lira and price stability. Officials have blamed faster price increases on high commodity costs, partly caused by Russia’s invasion of Ukraine, and other external factors.

“Expansionary fiscal and credit policies ahead of general and parliamentary elections in mid-2023 will add to inflationary pressures. But, even as monthly price gains remain positive, annual inflation is set to decelerate through to the fourth quarter of 2023 due to high levels in base periods.”

While inflation is peaking later than initially expected by authorities, Erdogan has been reiterating his unconventional view that lower borrowing costs have the power to ease prices. He has pressured the central bank to cut its benchmark into single digits, a goal it reached with its fourth straight cut in late November that brought the key interest rate to 9%.

As a result, Turkey has one of the world’s deepest negative rates when adjusted for prices. But the president, a self-described “enemy” of interest rates, has already signaled the country will stick with the ultra-loose monetary policy approach.

Treasury and Finance Minister Nureddin Nebati said on Twitter that he expects the “downward trend in inflation will be sharply felt” in the coming months, largely because of base effects.

The longer-term damage from the crisis may be in the way it warps price expectations. A November survey by the central bank found that respondents anticipate inflation to be 68% at the end of 2022 and almost 21% as far out as two years.

The central bank has a more upbeat assessment. It predicts consumer inflation will end this year at about 65% -- 13 times higher than its official target.

Governor Sahap Kavcioglu has said the rate cuts were in response to signs of an economic slowdown. He has relied on a number of indirect measures to control loan growth and promote wider use of the lira.

Read more: Nice Credit If You Can Get It in Turkey’s Micromanaged Economy

Consumer prices could come under pressure again if authorities unleash more stimulus ahead of elections just months away. A much-anticipated increase in the minimum wage is expected to be announced in December.

“Although annual inflation will decelerate due to base effects -- related to the lira’s drop a year ago -- the underlying trends remain worrying,” said Marek Drimal, a Societe Generale strategist. “We don’t expect inflation to return anywhere near the central bank’s target on our outlook horizon.”