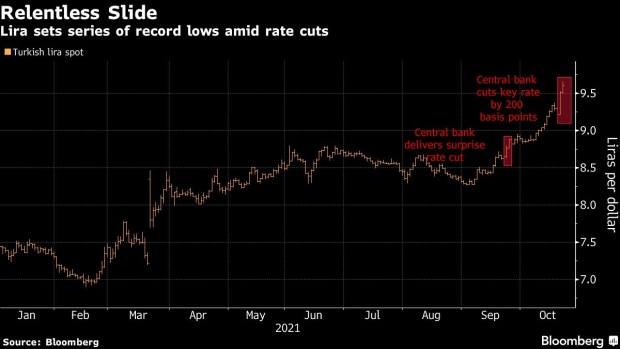 (Bloomberg) -- Turkey’s latest diplomatic row may have given currency traders another reason to dump the struggling lira.

Already under pressure following a larger-than-expected rate cut last week, the currency is likely to encounter fresh selling after President Recep Tayyip Erdogan said on Saturday that the ambassadors of 10 foreign nations were no longer welcome.

“If it becomes official and those 10 ambassadors are declared persona non grata, it will batter the lira,” said Haydar Acun, a managing partner at Marmara Capital in Istanbul. “It looks like a political move to flare up international tension and boost poll ratings.”

Erdogan has long sought to portray himself as his country’s bulwark against hostile foreign powers to appeal to nationalist voters.

His call to expel the envoys of countries including the U.S., Germany and France for demanding the release of a prominent government critic coincides with opinion polls suggesting his support base is eroding as the cost of living soars.

The risk is that his rhetoric may end up worsening that fragile economic backdrop.

“His decision is likely to increase the selling pressure on the lira which will have negative consequences for inflation,” said Piotr Matys, senior currency analyst at InTouch Capital Markets.

The currency has lost 23% of its value this year, making it the worst performer in emerging markets. The lira’s one-month implied volatility rose to the highest since May on Friday.

Turkey Rates Shock Has Strategists Eyeing Lira at 10 per Dollar

Previous bouts of tension between Turkey and other countries -- especially the U.S. -- have taken a toll on lira assets, leading to wild swings in local financial markets. The country suffered a currency crisis in 2018 over the fate of an American pastor who was imprisoned in the country.

The latest diplomatic flare-up centers on businessman and philanthropist Osman Kavala, who has been jailed for four years in a case that’s become a test of the independence of the judiciary and the rule of law in the eyes of some foreign governments.

The spat comes just a week before a Group of 20 nations summit in Rome, where Erdogan is hoping to meet with U.S. President Joe Biden. No meeting has been confirmed yet.

Investors have become used to nationalistic rhetoric from Erdogan that often stops short of sparking a full-blown diplomatic crisis.

However, local markets are arguably more vulnerable now as foreign ownership of Turkish bonds and stocks has slumped to new lows. They hold less than 5% of local-currency government debt stock, down from close to 30% in 2013, and local investors can be more sensitive to swings in the political mood.