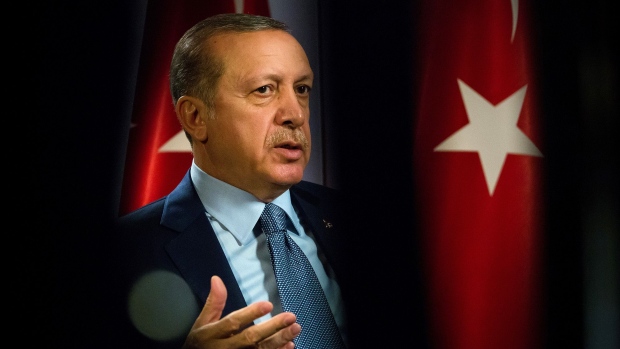 “I cannot honestly say that there is a healthy process in Turkish-American relations,” Erdogan told reporters during a visit to New York for the United Nations General Assembly on Wednesday, according to Turkish news channels.

In particular, he criticized the U.S. for sanctioning Turkey over its purchase of Russian missile-defense systems, penalties that included barring Ankara from developing and receiving Lockheed Martin Corp.’s advanced F-35 fighter jets, decisions which predate the Biden presidency.

Erdogan said Turkey’s position on retaining the S-400 batteries -- the first of which have been delivered but not deployed -- remains unchanged.

Before becoming president, Biden called Erdogan an “autocrat” and backed his removal by Turkish voters.

Turning to ties with Russia, Erdogan said he would discuss all aspects of the relationship during his upcoming meeting with President Vladimir Putin on Sept. 29, downplaying some rifts with Moscow over the war in Syria where they have supported opposing sides. “We have not seen any wrongdoing in relations with Russia so far,” Erdogan said.

“We will of course reach an important decision in Turkey-Russia relations,” he said of the meeting in Sochi.