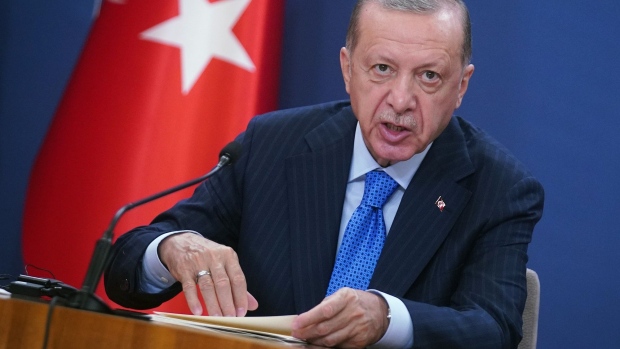 (Bloomberg) -- Turkish President Recep Tayyip Erdogan is working to consolidate his conservative voter base ahead of next summer’s election with proposed constitutional amendments that would expand the right to wear headscarves in public and prohibit same-sex marriages.

The move is intended primarily as political stagecraft, as the ruling coalition, led by Erdogan’s AK Party, doesn’t have enough votes to pass the amendments. But then, there isn’t any practical need to pass them.

Even if the amendments did get the votes needed to pass parliament, they would only enshrine the status quo in the constitution. Turkish civil law doesn’t specifically ban same-sex marriages, but it does define marriage as an arrangement between “a man and a woman.” Moreover, all limitations on wearing headscarves in schools and government buildings were lifted over a decade ago.

The ruling alliance needs two-thirds of the parliament’s 600 MPs to amend the constitution or 360 votes to take the proposal to a referendum. Erdogan’s AK Party and its partners hold 335 chairs, making any further steps impossible without opposition support.

Members of the opposition block are now assessing whether they should reject the draft completely or vote only for the headscarf amendment, which has the broadest appeal across parties. Erdogan will likely leverage any hesitation around the two controversial issues to attack rivals during his campaign.

The idea of elevating already-existing laws into the constitution first came up in October after opposition leader Kemal Kilicdaroglu vowed to introduce a bill that would enshrine in law the freedom to wear a headscarf. Erdogan pushed this idea further by refashioning it as a constitutional amendment and adding an article that would ban same-sex marriages.

With a critical election looming next year, Erdogan is burnishing his conservative credentials in an effort to appeal to voters. With inflation at a 24-year high and public discontent around the economy still rising, his conservative-nationalist alliance is doing everything they can to defeat a loosely knit opposition bloc.

(Corrects inflation rate mentioned in late paragraph. A previous version said it was a 22-year high.)