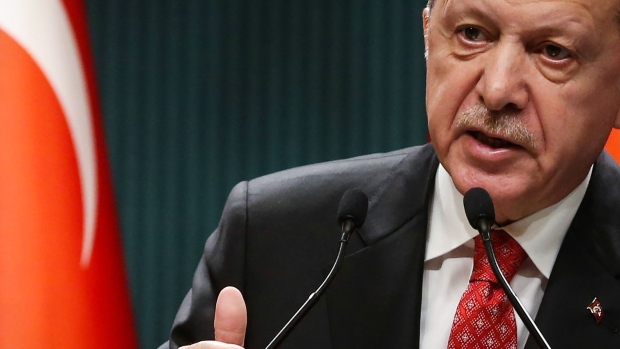 (Bloomberg) -- President Recep Tayyip Erdogan called on the European Union to keep its promises to Turkey and avoid discrimination as the threat of EU sanctions looms over the country.

“We see ourselves in Europe, not anywhere else, and we want to build our future with Europe,” Erdogan said Saturday in a video conference during his ruling Justice and Development Party’s regular provincial congress. “We want to be in stronger cooperation with our friends and allies.”

Turkish Cypriots and Cyprus have been at loggerheads over offshore gas reserves in disputed waters. Cyprus has been pushing other EU states to expand a blacklist against Turkey over its natural-gas exploration in the eastern Mediterranean. Other governments including Germany were wary of provoking Turkey.

“We believe that we don’t have any problem with any country or institution that we cannot solve with diplomacy and dialogue,” Erdogan said a week after a visit to northern Cyprus. “We have been keeping diplomatic channels open and we will continue to do so.”

European leaders will discuss the future of EU-Turkey relations at their summit in December, German Chancellor Angela Merkel said Thursday. When asked by a reporter about recent tensions between Turkey and EU members, Merkel said they will watch for developments in the next couple of weeks before discussing any potential sanctions.