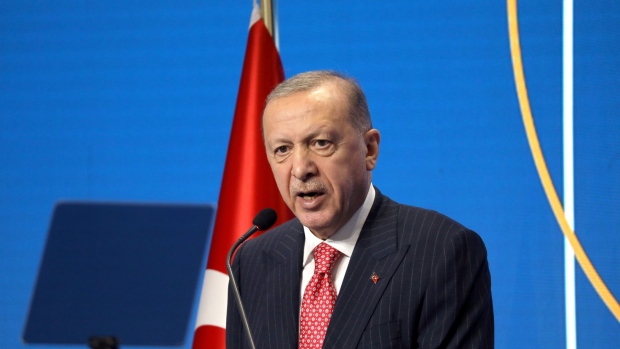 (Bloomberg) -- Turkish President Recep Tayyip Erdogan called on NATO allies to end arms embargoes on his country after a summit meeting of bloc leaders, pointing to Ukraine’s successful use of Turkish-made drones in its war with Russia.

Ankara has complained for years about western partners including the U.S., Canada, U.K., Germany and France refusing to provide missile-defense systems as well as critical equipment such as engines for tanks, warplanes, drones and helicopters developed by Turkish companies.

Most of those countries have expressed concerns that the equipment might bolster Turkish military offensives against autonomy-seeking Kurdish militants at home, as well as in Syria and Iraq.

After the talks in Brussels on Thursday, Erdogan said Turkey -- which has the second-largest army in the North Atlantic Treaty Organization after the U.S. -- expected “solidarity from our allies” as it contributes to the bloc’s defense and deterrence capabilities with war raging in Europe.

“There can be no logical explanation for obstacles that we’ve been facing amid the success of Turkish defense products,” he said in reference to the Turkish-made armed drones deployed by Ukraine. “It is in our common interest to remove the restrictions placed on our defense industry by some of our allies.”

Turkey’s currently sanctioned by the U.S. over its acquisition of the advanced Russian S-400 missile-defense system, which NATO members worry might be used to gather intelligence on Lockheed Martin Corp.’s F-35 stealth jet.

Turkey was barred from working on and receiving the F-35 after it decided to purchase the Russian system. It has refused to jettison the S-400 battery it acquired in 2019, and asked Washington to sell it F-16 jets to compensate for being locked out of the F-35 program.