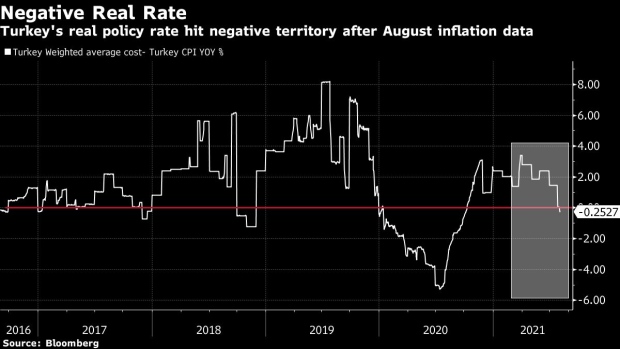 Customers dine at a restaurant in Istanbul, Turkey, on Monday, Aug. 16, 2021. The lira and other Turkish assets gained this week, buoyed by an improved outlook for tourism and the rollout of vaccines. Photographer: Moe Zoyari/Bloomberg , Bloomberg

Turkey’s central bank governor is about to make his biggest decision since taking the job: hold interest rates and face Recep Tayyip Erdogan’s fury, or comply with the president’s timetable for a cut and risk a markets backlash.

All but one of the 23 economists surveyed by Bloomberg predict the Monetary Policy Committee led by Governor Sahap Kavcioglu will keep the policy rate at 19% on Thursday. That’s unsurprising given consumer-price gains unexpectedly climbed to 19.25% last month, pushing the nation’s yield when adjusted for inflation below zero for the first time in nearly a year.

Yet Erdogan, who lost support as the pandemic hit Turkey’s economy, has called for a reduction in borrowing costs by September, arguing that lower inflation will follow. He’s fired three governors since 2019. The sole dissenter in the survey sees a potentially lira-weakening rate cut of 50 basis points.

Kavcioglu, who has repeatedly pledged to keep the benchmark interest rate above realized and expected inflation, this month signaled a shift in thinking. He’s argued “extraordinary conditions” triggered by the pandemic warrant focusing more on core inflation, which strips out volatile items like food and energy and is nearly 250 basis points lower than the headline figure.

Cristian Maggio, head of portfolio strategy at TD Securities, is among the majority of forecasters predicting a hold. “If they cut this week, it will be so obvious that it is politically motivated and it may cause even more damage than if they had cut one or two months ago,” he said.

“The reason why no one says ‘hike’ is not because hikes are not necessary, but simply not contemplated in the CBRT’s toolbox,” he said.

Ibrahim Aksoy, chief economist at HSBC Asset Management Turkey, who ranks first among forecasters of Turkish rate decisions in two years of Bloomberg surveys, is the only analyst to predict a rate cut, citing the governor’s recent comments on core prices and predicting it could see the lira hit a record low against the dollar.

The currency is down more than 16% since Kavcioglu’s appointment in March.

September inflation data is due Oct. 4. The central bank will update its own base-case scenario for prices through the rest of 2021 and the following two years on Oct. 28.