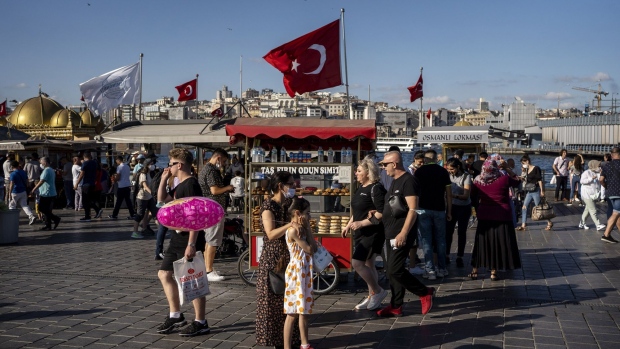 Inflation rose for a third month to an annual 19.25% in August, but many Turks say that price increases for food and rent have outpaced that. This comes as the government faces eroding support for Erdogan who is seeking re-election in less than two years.

“We are well aware of problems about the cost of living caused by inflation,” Erdogan said Thursday in an address to tradesmen in the central Anatolian city of Kirsehir. “We will prevent excessive price increases on the shelves by placing the inflation under control as soon as possible through lowering costs and fighting opportunists.”

The central bank blamed agricultural drought in Turkey and around the world as the reason behind acceleration in food inflation in a recent report. The jump in Turkish inflation in August pushed the benchmark interest rate adjusted for price growth into negative territory for the first time since October, dashing Erdogan’s hopes for an early cut in borrowing costs.

The government ordered mosques to deliver sermons Friday that warn sellers against inflating the prices of goods. Apart from food and rent, Turks are feeling the sting of higher prices for electricity and construction material.

Worshipers should “avoid black-marketing and not act opportunistically,” the sermon for Friday prayers said, according to the website of the Directorate for Religious Affairs, which controls mosques. Faithful Muslims “do not victimize individuals by overcharging.”