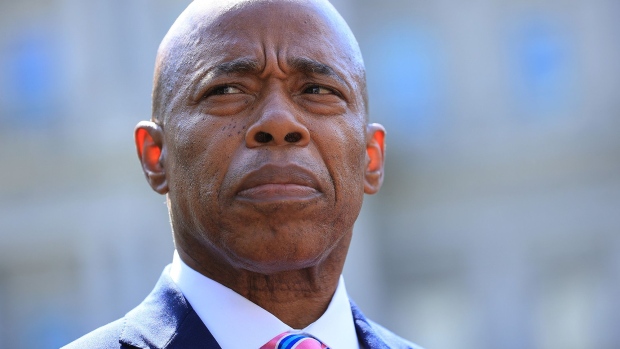 Adams said the city should reform, rather than scrap, the controversial education program, which has been accused of segregating its mostly Black and Latino students into the poorest-performing schools.

“We need to stop having a segregated school system,” Adams said Monday in a virtual press conference with ethnic and community media outlets.

He detailed plans to improve the system, which he said starts with pushing state legislators to extend mayoral control of the U.S.’s largest public school system. Mayoral control of city schools lapses in 2022. Adams also said he would provide entry tests to all children throughout their academic careers. Currently the test is given to four-year-olds, which opponents say don’t capture children’s full potential.

Adams is favored to win the Nov. 2 mayoral election in the heavily Democratic city, but he would not assume office until January. Still, that hasn’t stopped the Brooklyn borough president from publicly criticizing de Blasio on a wide range of policies ranging from education to health to policing.

De Blasio earlier this month announced an overhaul of the gifted and talented program, which calls on the city’s Department of Education to implement a new accelerated learning program in all elementary schools starting with kindergarten in the fall of 2022. De Blasio has also said he didn’t support a vaccine mandate for schoolchildren, a policy that Adams said on Monday that he does support as long as it has the backing of public health officials.

“Covid is a formidable opponent,” he said. “I want my children in school. I don’t want them at home because we have a mass outbreak.”

When asked to respond to Adams’s public break with the mayor’s policies, de Blasio said Adams has the right to disagree with the mayor.

Adams also said he supported introducing legislation that would allow noncitizens to vote in local elections and reaffirmed his goal of making sure New York remains a “sanctuary city” for undocumented immigrants.

“We need to make sure we give undocumented New Yorkers support they need to allow families to not live in the shadows of American dream,” he said.