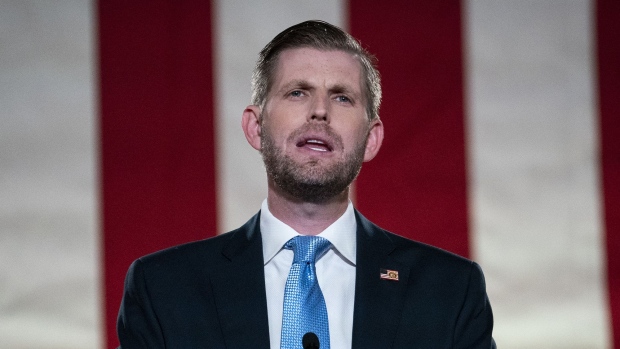 The second son of former president Donald Trump answered only background questions under oath and cited his constitutional right to avoid incriminating himself “in response to more than 500 questions over six hours” in October 2020, New York Attorney General Letitia James said in a filing Wednesday in state court in Manhattan.

The ex-president and two of his other children, Donald Trump Jr. and Ivanka Trump, are fighting subpoenas for their depositions in the probe on the grounds that James is trying to “nullify” their constitutional rights by seeking testimony that could be used against them in a criminal case.

James, who has been investigating the Trump family business since 2019, argues that Eric Trump’s invoking of the Fifth Amendment shows that isn’t true. Former Trump Organization chief financial officer Allen Weisselberg also invoked the Fifth hundreds of times during his deposition in September 2020, she said.

“There is no risk that any witness, much less these respondents, would appear for civil testimony without being aware of the possibility of criminal liability,” James, a Democrat and frequent Trump critic, said in the filing.

James is seeking a court order forcing the Trumps to submit to subpoenas for their testimony and documents, which the family members are trying to quash. The Trumps earlier this month told the court the probe is political theater, prompting James to show the court late Tuesday night a detailed analysis of her preliminary findings, including what she says are potentially fraudulent and misleading asset valuations.

James ultimately worked with Cyrus Vance Jr., then the Manhattan district attorney, to bring criminal tax charges against the Trump Organization and Weisselberg, though no such charges have been brought against Trump or his children.