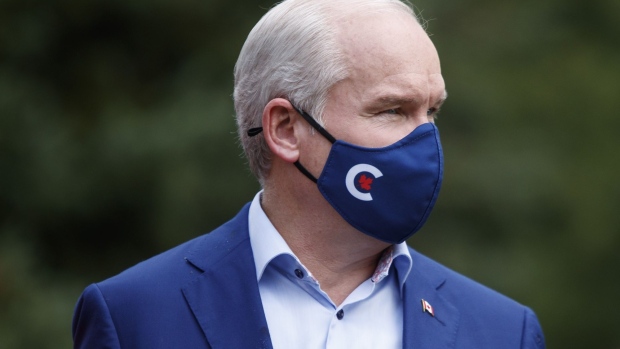 Erin O'Toole arrives at a campaign stop in Brantford, Ontario on Aug. 25, 2021. , Bloomberg

Canada’s Conservatives ousted their leader, Erin O’Toole, after he failed to stem internal dissent that has been building since last year’s election defeat -- paving the way for the country’s largest opposition party to shift to the right.

The military veteran and former corporate lawyer tried to moderate the party’s image with policies that appealed to centrist suburban voters. His removal potentially opens the door for Pierre Poilievre, a firebrand who is deeply popular with the Conservatives’ base, to take the helm.

Deputy Leader Candice Bergen has been named to the to top job in the interim.

O’Toole, 49, reversed the party’s opposition to a carbon price, alienating traditional supporters in oil-producing western Canada. He also attempted to walk a fine line on the convoy of truckers that has occupied downtown Ottawa since Friday. He supported their right to oppose vaccine mandates but avoided identifying closely with the group, some of whom hold extreme views.

Poilievre, the party’s 42-year-old finance critic, staunchly embraced the demonstrations, meeting with the protesters in person and defending their right to free speech.

“We all have to assume that Poilievre is the assumed front-runner,” Yaroslav Baran, a former Conservative staffer under Prime Minister Stephen Harper, said by phone. “For the last number of months, a lot of people in caucus and around the party have been referring to him as the de facto leader anyway.”

Discontent over O’Toole’s attempt to tack to the center has been simmering for months and burst into open rebellion this week, with more than a third of his caucus calling for his removal. They forced a secret-ballot confidence vote of elected lawmakers that O’Toole lost by a 73 to 45 margin on Wednesday, according to a statement from caucus chair Scott Reid.

“This country needs a Conservative Party that is both an intellectual force and a governing force,” O’Toole said in a video statement released three hours after the vote. “Ideology without power is vanity. Seeking power without ideology is hubris.”

He also offered some parting advice to his former colleagues. “Listen to all voices, not just the echoes from your own tribe. Realize that our country is divided and people are worried,” O’Toole said. “You need only take a walk down the street in front of parliament to see how divided we are.”

Conservative members selected Bergen, a westerner who expressed public support for O’Toole before his ouster, as interim chief until a full leadership contest can be held. It will be the third leadership race for the party since Harper -- who was prime minister for more than nine years -- resigned in 2015 after his election loss to Prime Minister Justin Trudeau.

Baran, now a partner with Ottawa-based consultancy Earnscliffe Strategy Group, said Poilievre is in some ways the mirror image of Trudeau. He’s popular with his own side but triggers intense hostility in his opponents.

Scott Reid, a speech-writer to former Liberal Prime Minister Paul Martin, encapsulated that sentiment in a series of tweets after O’Toole’s departure.

“I think the race will be quick and overwhelmingly dominated by Poilievre,” Reid wrote. Should the Ontario lawmaker win, he’d be “immediately and inevitably polarizing. A magnet for the angry, aggrieved and Trudeau-hating. He’ll hammer on cost-of-living, economic issues with a culture war overlay. And he won’t hesitate to use misinformation like a jack knife.”

But Reid also warned Liberals that it would be “a big error to dismiss or underestimate him.”

Poilievre was expected to run in the 2020 Conservative leadership contest but made a surprise, last-minute decision to stay out.

The rebellion against O’Toole raises questions about the party’s ability to stay united. It was formed in 2003 by merging the centrist Progressive Conservatives with the more populist Canadian Alliance. Prior to that, the Liberals capitalized on a divided opposition to win three straight majority governments.

On the unity question, Baran argued that the Conservative Party has “matured” enough now to keep its various factions united. He said that whoever takes over is unlikely to make radical changes, even if the party is likely to overhaul O’Toole’s climate-change platform.

“For all the division we think we have in this country, all our mainstream parties fit squarely inside the U.S. Democratic Party,” Baran said. “So, in real terms, we don’t have such things as radical policy shifts -- certainly not by other countries’ standards.”