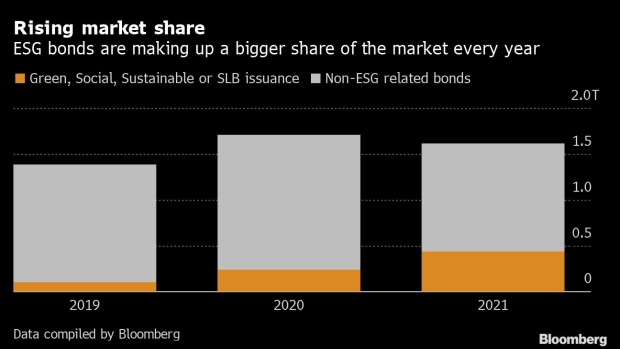 (Bloomberg) -- Investors in the booming ethical bond market are having to swallow short term losses on the road to improving their green credentials.

A global Bloomberg ESG index has lost 5.2% this year, underperforming a 4.6% drop on the Bloomberg Global Aggregate Index for investment-grade debt. An index comprising of just green bonds has fared even worse, losing 7.5% so far this year. That’s the biggest-ever drop.

The poor performance is partly explained by the bonds in such indexes having longer maturities on average, at a time when central banks are starting to hike interest rates. That’s compounded by borrowers capitalizing on the investor rush to extract higher prices in deals.

“Stakeholders themselves are not pushing for better returns because at the moment the return is a social return not an economic return,” Bedford Row Capital Chief Executive Officer Scott Levy said in an interview. “That is a short term trend, not a long term trend.”

The sagging returns threaten to be an unwelcome sideshow to one of the fastest-growing parts of the global debt machine. In Europe alone, sales of environmental, social and governance (ESG) debt made up more than a quarter of the region’s syndicated deals this year, a record and nearly double 2020.

For investors wanting to “greenify” their portfolios, one thing is clear: they’re going to need to do their homework, particularly since returns next year may also be threatened by soaring credit market volatility as central banks battle surging inflation.

“Investors need to do their work to pick the best,” said Scott Freedman, a fund manager at Newton Investment Management, which oversees 103 billion pounds ($137 billion) of assets including ESG debt. “If you own green bonds purely passively, you would be exposed predominately to European investment-grade corporates, mainly utilities and banks, so expect tight spreads and low yields.”

A look at the ESG bond deals sold this year in Europe shows spreads on a third are now quoted wider than at issuance, according to data analyzed by Bloomberg. Those deals typically also carried a so-called greenium, a premium paid by investors to grab a green bond instead of a conventional note.

The “greenium shows certain investors are willing to pay for impact,” said Erika Wranegard, a fixed-income portfolio manager at Lombard Odier Investment Managers. “The right level of greenium should, in addition to reflecting the credit quality and liquidity of the bond, reflect the impact of the project. This opens up for greenium divergence across thematic bonds, which can be an interesting investment opportunity in 2022.”

Juicing returns by avoiding the ESG debt market altogether is getting harder. Governments are setting long term emissions reductions targets that are pushing companies to adapt, while regulators are increasingly scrutinizing green assets and lending at financial institutions.

That’s driving bullish estimates for global issuance. ING Groep NV sees volumes reaching as much as $1.5 trillion in 2022, after they surpassed $1 trillion for the first time this year. For some, the future benefits may far outweigh any current losses.

“In the longer term, an issuer that has a robust sustainability strategy should generate a superior risk-adjusted return,” said Newton’s Freedman.