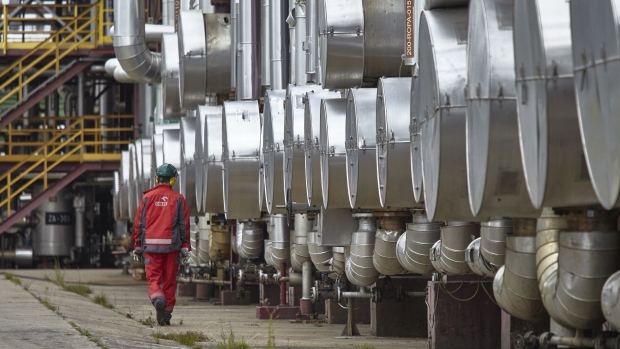 (Bloomberg) -- The sustainable bond market has passed a milestone.

The development marks a first in a market that’s enjoyed near-unfettered growth in recent years. It’s also a rare example of an SLB whose fate is tied to an ESG ratings industry that’s been the target of criticism. Issuers in the roughly $200 billion SLB market mostly tie their triggers to things like emissions targets or water usage goals.

“We expect SLBs linked to ESG ratings to remain rare in the market,” said Charlotte Edwards, an analyst at Barclays Plc. “Issuers are likely to be reluctant to outsource their key performance indicator calculations, especially given that ESG rating methodologies are generally perceived as opaque by the market.”

A PKN Orlen spokesperson said the company is now “making an effort to boost the efficiency of all areas being assessed by MSCI, which will enable the rating to rise in the future” and trigger a reduction in the coupon.

MSCI ESG Research said the change in PKN Orlen’s rating related to an assessment of governance and corporate behavior, with MSCI “finding that its policies and programs to address business ethics and corruption appear weaker than peers in its sector.” MSCI also said that “corporate behavior was introduced as an input to the governance criteria in an update to the MSCI ESG Ratings methodology in December 2021,” which is when the PKN downgrade took place.

It’s been a tough year for the wider SLB market, and issuers are bracing for more penalties to be triggered. That’s as an energy crisis creates an increasingly challenging environment for companies promising decarbonization.

SLBs gained their foothold under much more accommodating circumstances, when interest rates were low and regulations in their infancy. Global SLB sales grew almost tenfold last year to around $108 billion, according to Bloomberg Intelligence, with an additional $80 billion so far in 2022. The debt differs from the better-established green bond market, where proceeds are earmarked for environmental projects. Funds raised through SLBs can be used for anything, boosting their appeal for issuers.

The rapid growth in SLBs has also attracted criticism, with weak and flexible targets alongside tiny penalties leaving some creditors cautious. A number of the world’s largest ESG bond investors refuse to touch SLBs, while early investors have voiced concerns that corners of the market risk losing credibility.

Witnessing a financially-material SLB trigger go off remains a novelty. That’s because most issuers either have targets that are several years away, or so unambitious that they can be easily met even in difficult markets. UK grocery chain Tesco Plc was criticized last year for tying its SLB to goals that covered only 2% of annual emissions. Fashion giant Chanel did miss an interim target, but that didn’t lead to a financial penalty.

In PKN Orlen’s case, it told investors its objective was to sustain or improve the MSCI rating that was assigned when the bond was issued. MSCI’s rating of PKN Orlen was A when it issued the SLBs. It has since dropped to BBB.

ESG ratings remain largely unregulated, though that looks set to change. The UK’s Financial Conduct Authority said earlier this month it wants to introduce a code of conduct for the industry, as it awaits government permission to enforce actual regulations.

Though the event is unlikely to make much of a real difference to PKN Orlen’s finances, it’s “a significant event for the nascent SLB market,” said Josephine Richardson, head of portfolio strategy at the Anthropocene Fixed Income Institute. “The security worked as expected, which should help to give investors confidence in the robustness of the SLB product.”

AFII’s Richardson said there was no clear market reaction to the higher coupon payments.

Because the bonds in question are illiquid and denominated in zloty, “we caution against extrapolating these conclusions too broadly,” she said in a report.

--With assistance from Maciej Martewicz and Priscila Azevedo Rocha.