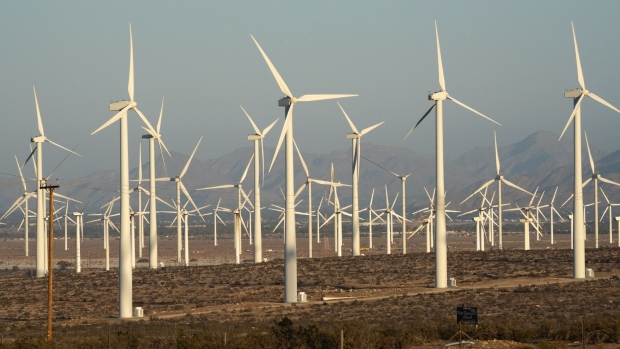 Wind turbines at the San Gorgonio Pass wind farm in Whitewater, California, U.S., on Thursday, June 3, 2021. Communities from California to New England are at risk of power shortages this summer, with heat expected to strain electric grids that serve more than 40% of the U.S. population. Photographer: Bing Guan/Bloomberg , Bloomberg

(Bloomberg) -- More than half the money that flowed into European funds last year went into sustainable products, according to the Association of the Luxembourg Fund Industry, which represents the region’s biggest fund market.

As a result, a record 1.12 trillion euros, or $1.4 trillion, in investor cash has now been steered toward strategies that address environmental, social and governance considerations, according to the study, which is the first in a series that ALFI is planning to do on ESG allocations. The development means that 11% of European assets under management are now in sustainable funds.

The study shows that total sustainable assets have more than doubled since 2018, adding to evidence that growth in some corners of ESG investing is approaching an exponential pace. Adeline Diab of Bloomberg Intelligence estimates that total ESG debt issuance surpassed $3 trillion in early June, with two-thirds of that amount generated over the past year and a half alone.

“The large investors, the pension funds, institutional investors, they have already said that in one or two years time they will not consider mainstream funds any more,” Marc-André Bechet, deputy director general at ALFI, said in an interview.

Asset mangers are devoting more attention to sustainable funds than to conventional funds, the study found. Launches of new ESG vehicles jumped by almost half in 2020 from a year earlier, while the number of new traditional products slipped 17%.

Funds are under intense pressure to document their ESG credentials as Europe rolls out an historic package of legislation designed to divert financing away from businesses that hurt the climate. Asset managers are now trawling through corporate data to decide what to cut in order to reduce their carbon footprints.

A new European regulatory framework for asset managers -- the Sustainable Finance Disclosure Requirement -- means funds need to classify products so end investors know how green their holdings are. By that measure, about 28% have been categorized as light green under so-called Article 8 rules, according to Morningstar and financial services consultancy zeb, which also helped compile the fund data.

“We certainly didn’t expect that many funds to be classified as Article 8,” said Hortense Bioy, global director of sustainability research at Morningstar. “It is a very competitive landscape, and asset manager really want to have as much funds as possible in the category 8 category, at least.”

The research also shows that a further 3% in assets under management have so far been categorized as dark green, or Article 9 under the EU classification system. To achieve that label, managers need to prioritize climate goals over financial returns, though some speculate that such assets may end up being more lucrative investments in the longer run.

Among managers with the biggest share of light and dark green funds in their product lineup were SPP, Mirova and Swisscanto. At the bottom were Vanguard, JPMorgan and Aviva, according to the study.

Researchers also found that ESG strategies are being adopted by a growing number of money market funds and passive funds, with roughly a fifth of sustainable assets in passive products.

They classified about 3,200 funds as sustainable out of a universe of about 33,000. The report didn’t include funds of funds, feeder funds or money market funds. Also excluded were funds that banned some companies or industries but didn’t integrate ESG into their investment strategies.