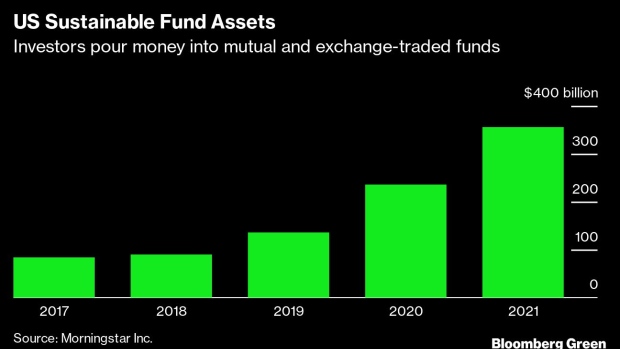 (Bloomberg) -- US regulators are expanding their crackdown on misleading labels of investment products with a probe focused on whether managers of funds that are marketed as sustainable are trading away their right to vote on environmental, social and governance issues.

For the past several months, Securities and Exchange Commission enforcement lawyers have been peppering firms offering ESG funds with queries, including how they lend out their shares and whether they recall them before corporate elections, according to four people with knowledge of the matter. The practice lets asset managers earn fees that benefit investors, but it can also impact the ability to cast ballots.

The SEC’s investigation delves into whether asset managers are making the proper disclosures to investors, said the people, who asked not to be named because the queries are private. It drives at the heart of whether ESG investment funds are able to meet their promise of helping combat societal ills through long-term investments in certain companies, especially if shares they lend out wind up with short-sellers taking an opposing view.

The regulator declined to comment and it couldn’t be determined how many firms had been contacted.

The ESG investment industry’s sustainability claims have come under mounting scrutiny during the Biden administration, with the SEC proposing new marketing regulations and starting to sue firms over their disclosures. Last year, the agency set up a task force of enforcement attorneys to focus on the issue and said that many funds weren’t doing enough to ensure their actions matched their promises.

Exchange-traded funds and mutual funds billed as sustainable managed $2.5 trillion globally as of the end of June, according to data from research firm Morningstar Inc. That massive growth has only added to concerns that the environmental and societal benefits of investments are being exaggerated, a phenomenon that critics call greenwashing.

Meanwhile, after record inflows, there are signs that interest is now slowing, and in Washington, both Democrats and Republicans have raised concerns.

At the SEC under Gary Gensler, Democrats voted to propose stricter rules on fund names and more standardized disclosures for investment products that carry an ESG label, suggesting they’re a way for investors to fight climate change or avoid putting money into the weapons or fossil-fuel industries. Meanwhile, GOP officials in states including Texas, Florida and West Virginia have slammed ESG as a threat to the economy, or an affront to America’s energy industry.

When it comes to proxy voting specifically, ESG money managers have been on the defensive at the SEC for more than a year.

In March 2021, Allison Herren Lee, a former Democratic Commissioner who was acting as SEC chair, said funds should disclose more on how they vote for investors on related issues. The pressure has continued with Gensler pushing a plan introduced in May that could require funds to explain how proxy voting fits into strategies that purport to consider ESG factors.

Investment firms typically lend out shares to other financial firms to settle trades or to help short sellers wagering against a company. Asset managers have argued publicly that there are policies in place to prevent firms from borrowing securities solely for the purpose of voting on shareholder resolutions.

For ESG fund managers, the practice of short-selling can raise specific challenges. Short-term bets against companies could make it harder for an ESG fund manager to influence a portfolio company to become more sustainable over a longer period. It also creates the awkward appearance of aiding investors who are betting against the companies that the fund has deemed worthy investments.

Furthermore, supporters of the practice say, money managers can recall shares if they want to vote on shareholder resolutions to exercise their influence and power over an ESG-related issue facing a company.

“When the vote matters, mutual funds recall their shares,” said Josh Galper, managing principal at Finadium, a consultancy. “The funds most equipped to respond to shareholder concerns or the SEC are those that have internal ESG policies that make clear what they’re going to do when a vote comes up.”

The SEC enforcement division’s asset management unit, which polices fund disclosures, is leading the probe, according to one of the people familiar with the investigation.

While it’s unclear if the securities-lending probe will lead to the regulator suing firms or investment advisers, the agency has started bringing cases over ESG disclosures.

In May, a unit of Bank of New York Mellon Corp. without admitting or denying the SEC’s allegations paid $1.5 million to settle claims that it falsely implied some mutual funds had undergone an ESG quality review. In April, Vale SA, the Brazilian mining giant, was accused of making misleading claims in ESG disclosures about the safety of a dam that collapsed in 2019 and killing 270 people. The firm has denied those claims.