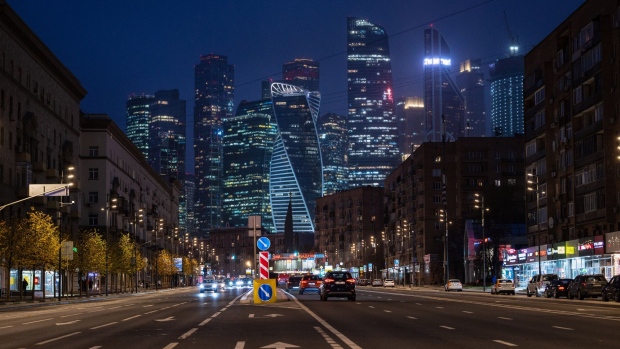 Illuminated skyscraper buildings at night in the Moscow International Business Center (MIBC), also known as Moscow City, district of Moscow, Russia, on Thursday, Oct. 21, 2021. The Bank of Russia is set to raise interest rates, but uncertainty about the size of the hike has intensified. Photographer: Elena Chernyshova/Bloomberg , Bloomberg

The figure is based on an analysis by Bloomberg of roughly 4,800 ESG funds representing more than $2.3 trillion in total assets. Of those, about 300 were directly exposed to Russia, though the figure may be higher.

After almost two weeks of war, those assets are likely to be close to worthless. Investment managers who stayed out of Russia say ESG funds should never have been in the country in the first place. Philippe Zaouati, chief executive of Mirova, the $30 billion sustainable-investing unit affiliated with Natixis Investment Managers, said ESG fund managers need to stick to democracies, and avoid autocracies.

“There is no responsible investment if there is no democracy,” he said.

“We have always thought that ESG was a question of having a sincere intention to use finance for something good; if it’s not this then it’s a management technique or investing style,” he said in an interview last week. “With the Ukraine crisis, we see very clearly that some ESG funds and managers have sincere intentions, and others just apply a technique.”

With sustainable investing now a $40 trillion industry that’s been embraced by the world’s biggest financial firms, it’s being applied to virtually all markets and investment products. Banks now deal in ESG derivatives, while asset managers track a vast array of indexes from providers like MSCI Inc. that offer varying degrees of ESG alignment.

MSCI, which said last week it’s ditching Russian equities from its emerging-markets gauge, has more than $16 trillion in assets benchmarked to its products overall. It said the move followed feedback from market participants who said Russia’s equity market was “currently uninvestable.”

Many of the ESG funds that say they’re now trapped in Putin’s Russia tracked such indexes, in large part because the supply of genuinely green or social assets hasn’t been able to keep up with the breathless surge in investment demand.

Bard Bringedal, chief investment officer of Storebrand Asset Management, said the war in Ukraine has left ESG funds facing “one of the most extreme outlying examples” of an “extraordinary” event.

Storebrand, which oversees more than $110 billion in assets from Norway, is exposed to Russia through the MSCI indexes it tracks, though Bringedal said his firm can deviate from those benchmarks if internal analyses show it makes sense to do so.

The “nature of emerging markets is that there is a higher risk of extraordinary events occurring, post-investment,” Bringedal said. “This risk is partly inherent in the potential returns.”

Mirova’s Zaouati said Russia’s war on Ukraine shows that ESG funds can no longer afford to ignore the political backdrop against which they’re investing. He and others also argue that the same logic should apply to assets from China, which Mirova has blacklisted.

“Autocratic regimes, democracy, human rights -- these are topics that are nowhere today in ESG analysis,” he said. “If you look at what ESG managers do on human rights, they usually try to avoid any political statement.”