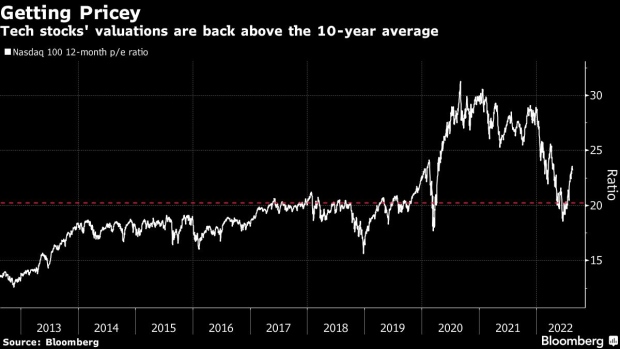 Pedestrians outside the New York Stock Exchange (NYSE) in New York, US, on Monday, July 18, 2022. US stocks fell amid a drop in big tech as investors assessed the outlook for corporate profits and risks to economic growth as central banks hike interest rates to combat runaway inflation. , Bloomberg

(Bloomberg) -- ESG funds’ longstanding devotion to tech ignores some basic principles of portfolio management and exposes investors to the risk of continued losses, according to the head of equities at Amundi SA.

There’s been “a lot of complacency,” said Kasper Elmgreen, who’s overseen stock allocations at Amundi since 2019. “Good ESG is not a replacement for bad fundamentals. You need both.”

ESG fund managers have had one of the worst starts to a year in recent memory, thanks in large part to their exposure to big tech. That’s after some of the largest environmental, social and governance funds spent years loading up on the sector, which proved a hugely lucrative bet during the pandemic. It quickly backfired, however, once central banks started yanking up interest rates to combat decades-high inflation.

“The market went a little bit on autopilot, both on hailing the ESG credentials of tech, but also of basically ignoring gravity, ignoring fundamentals in terms of what these companies were worth and allowing them to trade at multiples that were unsustainable,” Elmgreen said.

And even though “we’ve seen some of the hot air come out of the balloon,” the selloff probably isn’t finished, according to Elmgreen. “There’s still some excesses priced in,” he said.

Those declines include the effect of a rebound that started in mid-June. In fact, the recent gains in technology stocks have lifted the Nasdaq 100’s valuation to 23.2 times forward earnings, above the average valuation of 20.2 times over the past decade.

Elmgreen said most of the actively managed funds he oversees at Amundi are typically underweight tech. “There are some companies we find that offer opportunity,” he said, without elaborating. “But on average it’s an area where we just can’t get the math to work.”

Part of the ESG challenge facing tech is the extent to which hidden social risks are set to surface. That’s as ESG investors become more sensitive to issues such as workers’ rights and supply chains that may rely on human rights abuses, according to Elmgreen. The cost-of-living crisis has already triggered widespread strikes across Europe, demonstrating the risk to businesses of ignoring such social considerations.

“There’s a risk around labor practice,” both in relation to employees and supply chains, Elmgreen said.

Amazon.com Inc. is among tech giants to have grappled with a rising number of unfair labor practice complaints from workers around the US, while federal investigators recently inspected several of the company’s warehouses as part of a probe into potential worker safety hazards. Such labor-rights movements have won the attention of US President Joe Biden, reflecting the changing political climate.

Workers’ rights have garnered greater attention this year after tight labor markets made it harder for companies to retain employees, forcing many to consider wage rises. Apple Inc. is responding by boosting its company-wide compensation budget, as it contends with efforts to unionize its stores across the US.

Elmgreen said another potentially under-appreciated risk in tech is how efforts to regulate data protection will affect the industry.

Such considerations, all of which fall under the “S” of “ESG,” are “risks that are perhaps less intuitive,” he said.