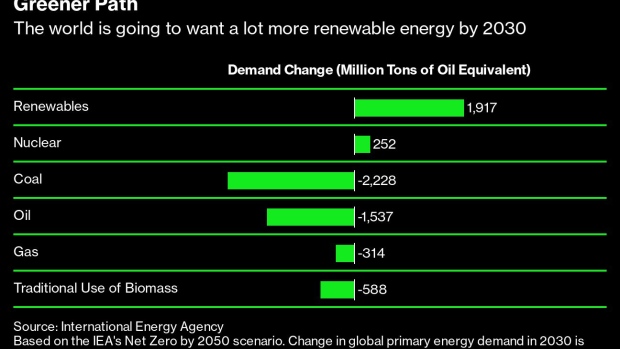 Arrays of photovoltaic panels at Iberdrola SA's Puertollano II solar plant in Puertollano, Spain, on Thursday, May 19, 2022. The solar farm will be part of the 100% renewable supply mix to power Iberdrola's new green hydrogen plant. , Bloomberg

There’s an idea going around that climate investing has gone too far. Call it a vibe.

Most of it is political opportunism: The US Republican party has declared war on environmental, social and governance-themed investing, or ESG, blaming it for pushing up prices and creating inflation.

The story goes that climate-minded investors have worsened the energy crisis created by Russia’s invasion of Ukraine. Fossil-fuel companies outside of Russia would have been ready to meet the world’s energy needs, according to the narrative, if it wasn’t for the feckless investors with wishy-washy green agendas that deprived the industry of capital.

The chorus against these environmentally-focused investors seemed to reach a crescendo over the past couple of weeks with a few attention-grabbing voices on the subject — from Elon Musk’s declaration that ESG is a scam to an HSBC executive who slammed climate worries as “hyperbole.”

The story is barely coherent, and the evidence for it is shaky. It’s true, investors certainly aren’t steering energy companies toward long-term investments in fossil fuels at the moment. And there have been some large and high-profile divestments from fossil-fuel equity and debt. But energy companies can still raise finance for new oil and gas projects easily —assuming they even want to.

Energy companies, for the most part, don’t want to start new long-term oil and gas projects because they see where demand is going. They know fossil fuels are on the way out.

In response to the growing number of countries announcing pledges to reach net-zero emissions over the coming decades, the International Energy Agency illustrated a bullish scenario for renewable energy demand:

At their latest earnings calls, Exxon, Chevron and Shell all maintained they’d keep returning money to shareholders rather than increasing investments in production. Exxon Chief Executive Officer Darren Woods was adamant that the company will not increase its capital spending above the guided range.

Further along the production line, oilfield service providers have no plans to rapidly increase investments, according to Wood Mackenzie’s Ed Crooks. Only 14 floating rigs are under construction around the world, compared with almost 100 in 2012-2013, Crooks wrote in a post on the researcher and consultant’s website. Service providers have been burnt by big demand squeezes in the past, that led to oversupply and subsequent price collapse.

Investors aren’t pushing back against this view, mostly because there isn’t any other choice. Pension funds, for one, are often deemed “universal owners,” so they must remain invested in most large-listed companies to be sufficiently diversified. That means their options for disagreeing with a company’s strategy is limited. Unable to divest, they often choose to share their views on company strategy via “engagement.” Although these conversations are often incredibly opaque, there doesn’t appear to be requests for a ramp-up in risky fossil-fuel expansion.

A survey of large pension funds with net-zero commitments from Europe, the UK, North America and Japan conducted between January and April found the Russian invasion of Ukraine hadn’t led to reneging on investment beliefs on the energy transition.

“They [pension funds] see it as a 30-year transition. They’re not likely to be diverted from that journey,” Amin Rajan of CREATE-Research, the survey’s author, said in an interview. He saw signs of doubling down on climate commitments, rather than moving away from them.

And why would investors change course? Indeed, the demand to shift away from fossil fuels is, if anything, now accelerating due to the current Ukraine situation. Just look at Europe, which has historically been Russia’s best customer for energy. It’s already raised its ambitions for weaning off fossil fuels in the wake of the crisis. Through its REPowerEU plan, the bloc has increased its renewable energy target from 40% to 45% by 2030; it wants to roll out an extra 15 terawatt hours of rooftop solar this year, and produce and import millions of metric tons of green hydrogen. It also plans to cut final energy demand by 13% by the end of the decade.

But to be clear, no investment — whether it’s in a wind turbine or gas plant — will be an immediate fix for those suffering with higher energy and fuel bills today. Energy investment moves at a different pace to energy markets. What we’re experiencing now is a crunch that has only revealed the sluggishness of efforts to get off fossil fuels so far. Insufficient work has been done on both clean energy generation and demand reduction through means such as building efficiency and transport system changes. Governments can take a big portion of the blame for that, but the financial sector has a part to play, too.

For all the grandstanding about sustainability and climate, investors are mostly along for the ride of a bumpy, slow transition, rather than the swift one that a stable climate requires, or the orderliness that would protect us from spikes.

ESG critics may think climate investors have become a force so powerful that they’re already controlling energy markets. And in many ways, it’d be nice if that was true.