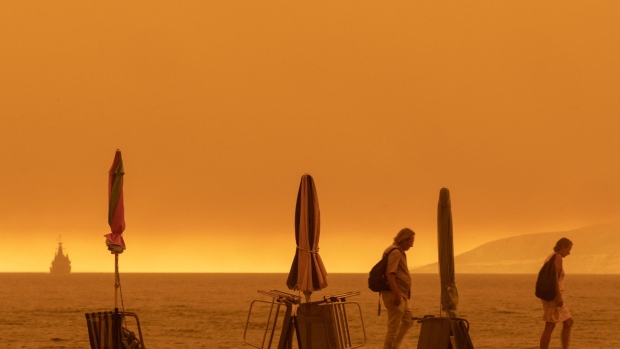 Dead and cleared trees from the Creek Fires in Fresno County, California, U.S., on Monday, June 7, 2021. The push to thin California's forests is a race against time as climate change has left the U.S. West hotter and drier creating prime conditions for blazes with fire season running about a month ahead of schedule. , Bloomberg

(Bloomberg) -- The damning United Nations report on global warming delivered a reality check for the investors betting that markets can limit the damage.

The assessment by the Intergovernmental Panel on Climate Change, released on Monday, should prompt investors to “review their commitments to tackling climate change and to take action,” said Fiona Reynolds, chief executive of the UN-backed Principles for Responsible Investment.

Often that kind of reflection sends more money pouring into environmental, social and governance investments, raising concerns that financial markets’ short-term outlook might end up undermining claims of sustainability. Between 2018 and 2020, for example, European asset managers had to strip the ESG label off $2 trillion in allocations, as stricter rules were devised.

Sebastian Mernild, one of the co-authors of the IPCC’s report and a professor of climate change at the University of Southern Denmark, says the message to the finance industry is that tackling global warming requires a longer perspective. “We are looking into 2060, 2100,” Mernild said. “Every time we increase the global mean temperature by half a degree, then we will face a more extreme climate. That will have severe consequences for us. It will be very costly.”

Praxis Mutual Funds, one of the oldest socially responsible investment firms, which manages about $2 billion, said the IPCC report shows the need to move faster in the short-term and invest in green debt that can have greater real-world impacts. “It changes the calculus,” said Chris Meyer, manager of stewardship investing research and advocacy. “We will need to have a sharper focus. This report shows that investors aren’t moving quickly enough.”

Schroders Global is among the funds that have committed to establishing a pathway to net zero. The adoption of these goals hasn’t yet led to lowered emissions, as the IPCC report makes clear. “Finance alone cannot solve the climate threat. This is ultimately a question of every group making significant and sustained steps to cut emissions,” said Andy Howard, the head of sustainable investment at Schroders. “Anyone looking at the same picture and data must surely reach a similar conclusion.”

With the scientific consensus now making clear that the average global temperature is very likely to rise at least 1.5° Celsius above pre-industrial levels by 2040, investors may need to pay even more attention to their contribution to limiting warming. That’s where temperature-alignment metrics come in. These grade portfolios based on their holdings’ projected greenhouse gas output.

It can be helpful “in evidencing what is a fair share that a given company needs to be doing to meet the carbon budget and how exposed companies may be to value impact from the transition,” said Christopher Kaminker, head of sustainable investment research and strategy at Lombard Odier Group.

Among asset managers to have released such data is Axa SA, which is doing better than most. But even after cutting its exposure to greenhouse gas emitters, its portfolio still implied a temperature increase of almost 3°C by 2100. At that level, scientists warn that large parts of the planet become uninhabitable, entailing mass extinctions of species. Yet knowing the number at least provides a picture of the real-world fallout of an investment strategy.

Elsewhere, U.K. insurer Aviva Plc and Japan’s $1.7 trillion Government Pension Investment Fund have published data on warming potential. New York-based BlackRock Inc., with $9.5 trillion of assets, plans to do the same for some of its funds, and the practice looks set to spread in the years ahead.

It could be a clear step toward embracing the science more seriously, which some argue has been lacking in the asset management industry. Still, critics of implied temperature metrics say there’s a lack of reliable emissions data to make the computations and the metrics rely on assumptions.

Many strategies chasing ESG returns still fail to take into account the economic impact of climate change, according to an analysis by the head of strategic research at Nordea Bank Abp. The research finds that the biggest risks lie in the hottest parts of the world, many of them emerging markets.

“There has been a disconnect between what academics have found and what the financial industry has based its views on,” said Steen Winther Blindum. His report, “How Climate Change Affects Return on Your Investments,” builds on existing research to show how countries most exposed to global warming face the biggest declines in gross domestic product. “We know if GDP is affected, then there’s also an impact on the returns of these risky assets,” he said.

“The reason we started this work was because we saw a lot of portfolio managers were seeing opportunity in these regions because they looked cheap,” Blindum said. At least for those who don’t consider the toll of climate change. “We wanted to remind people that maybe you should look a little more carefully into this.”

Academic work linking an overheated planet to the loss of economic wealth has yet to be acknowledged by much of the asset-management industry. There are a few exceptions, and Blindum says the biggest managers such as BlackRock have started to incorporate more climate science in their ESG models. But many are still guided by short-term profit models that are ill-suited to the threat posed by global warming.