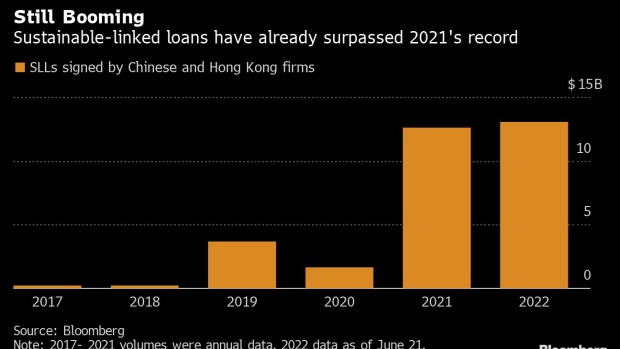 (Bloomberg) -- A record boom of sustainability-linked loans signed by Chinese and Hong Kong firms is raising questions about limited disclosures amid broader concern about the global market for the facilities.

Firms from China and Hong Kong have signed a record $13.1 billion of such loans in 2022, surpassing the $12.6 billion for all of last year, according to data compiled by Bloomberg. Conversely, the volume of sustainability-linked loans globally has declined.

The loans lay out sustainability targets for borrowers. If the companies meet them, the interest they pay can decrease, but if they don’t, it can rise. Such lending doesn’t have restrictions on use of proceeds and can fund general corporate purposes, unlike some other types of environmental, social and corporate governance financing such as green bonds or loans. The surge in deals is coming at a time when the ESG industry globally is under increased scrutiny from politicians and investors.

There are red flags concerning how targets are set for sustainability-linked loans, according to Chaoni Huang, head of sustainable finance in the Asia Pacific region at BNP Paribas SA. “If the targets are very marginal in terms of improvements, that is something we want to avoid at all costs.”

Link REIT’s March announcement for its HK$12 billion ($1.53 billion) sustainability-linked loan said “providing local employment opportunities” was one of the deal’s targets. The commercial-property owner told Bloomberg on Monday that it aims to have more than 10% of its Hong Kong housekeeping and security staff “hired locally from underprivileged groups by 2026 or 2027.”

Here’s How to Tell Green Good Deeds From Greenwashing: QuickTake

“There is a range of deals you see in this market,” said Nicholas Gandolfo, vice president at ESG research and data firm Sustainalytics. Some loans’ targets “are much more robust, strict and ambitious, and others may be less so. People are trying to work out elements of what best practice looks like.”

International principles for sustainability-linked loans only say borrowers are “encouraged” to publicly release information, including on how targets are calculated. Lenders may not find out what such targets are until the closing stage of a deal, according to Hong Kong-based loan bankers who asked not to be identified as they’re not authorized to speak publicly.

The lack of transparency on disclosing targets for sustainability-linked loans can partly be attributed to the lending industry’s more-private nature and illiquidity of loans on the secondary market, according to Gandolfo. But there generally are more extensive public disclosures involving sustainability-linked notes “because the ownership or holders of those bonds move around,” he said.

BNP’s Huang called for greater target-setting convergence between sustainability-linked loans and bonds. “Just because the nature of the loan business is more private does not mean the targets can be loose,” she said. “We need to have some consistency in terms of the materiality and ambitiousness of the ESG targets. This is still a work in progress.”