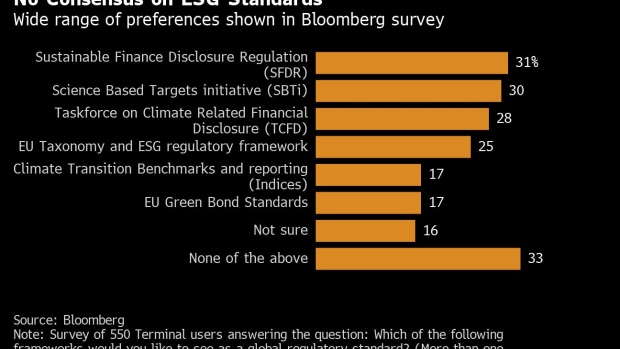 A Bloomberg News survey of ESG-related issues found that 53% of 550 Terminal users want more rules to help them tackle environmental issues. The picture varies across regions, with Europeans more in favor of extra regulations than Americans, while both regions gave green issues priority over social or governance matters. In Asia, where efforts to regulate ESG are trailing those in Europe and the US, a majority of survey respondents wanted more rules across the board.

“Greenwashing is rife in the capital markets,” said Luke Sussams, an analyst at Jefferies International Ltd. in London. Regulations address such risks, but “rigorous monitoring is the only way to really constrain greenwashing.”

The survey findings coincide with evidence that European regulations are far from perfect, while US efforts to roll out ESG rules face legal challenges in an increasingly fraught political environment. Investors are also more circumspect about allocating capital to green investments, as returns look less compelling than they did a year ago.

Against that backdrop, the need to assure investors that their money isn’t being misallocated is greater than ever.

Much of the concern among fund managers and corporations centers on the lack of reliable data, with financial professionals pinpointing ESG ratings as a key weakness. That’s as scores intended to measure corporate performance on environmental, social and governance factors remain largely unregulated.

“There’s still no unified standard of how to rate a company’s ESG credentials let alone what constitutes a good rating,” said Joachim Klement, a strategist at Liberum. “The result isn’t only that we encounter many investors that are frustrated with the lack of transparency and comparability of different ratings providers, but that more and more investors abandon the use of ESG ratings altogether.”

The European Commission said earlier this year that the responses it received via a consultation process showed that 94% of respondents think “intervention is necessary” to steer the ESG ratings market. The overwhelming majority said that improving transparency was key, while four out of five pointed to the need to tackle conflicts of interest among ESG raters.

If left to continue without regulatory intervention, ESG ratings firms may “simply put themselves out of business,” Klement said.

The European Union is well ahead of other jurisdictions in designing a regulatory framework that’s gradually shaping all corners of its markets. Yet its anti-greenwash rulebook for investors -- the Sustainable Finance Disclosures Regulation -- has recently come under fire. European regulators are among those to have criticized the EU Commission for failing to provide clarity around what it means by a “sustainable investment.”

Holes in the regulation have led to some disturbing outcomes. A study published earlier this month by Clarity AI found that a fifth of Europe’s supposedly greenest funds have more than 10% exposure to companies that violate UN and OECD standards on everything from bribery to environmental damage. The asset management industry has blamed inadequate rules and a lack of consistent data.

In the absence of clear regulations, firms are now spending “millions on legal fees to ensure they take the right approach,” said Hugo Gallagher, senior policy adviser at the European Sustainable Investment Forum. But that’s not always enough, he said.

SFDR, like many other corners of its ESG regulatory infrastructure, is underpinned by a taxonomy that’s intended as a universal sustainability lexicon to shape everything from corporate disclosures to investing and bond issuance.

However, the Bloomberg survey revealed that investors aren’t keen to have the EU’s Taxonomy Regulation become a global benchmark. The same holds true for SFDR, as well as the EU’s standards for businesses, known as the Corporate Sustainability Reporting Directive.

Only 25% of respondents said they wanted to see the EU’s taxonomy and ESG regulatory framework become a global standard. And only 31% want SFDR to become a cross-jurisdictional benchmark for ESG investing.

Meanwhile, the ramifications of making climate pledges without robust regulatory frameworks to back them are becoming a growing concern for financial market participants. And that’s not without reason, according to lawyers.

“These may be voluntary commitments but they are commitments nevertheless,” said Sonali Siriwardena, partner and global head of ESG at Simmons & Simmons. “So firms should be wary of being caught in the riptide of unrealistic ambitions as it may expose them to both litigation and reputational risks if they do not meet these commitments.”

--With assistance from Brad Skillman.