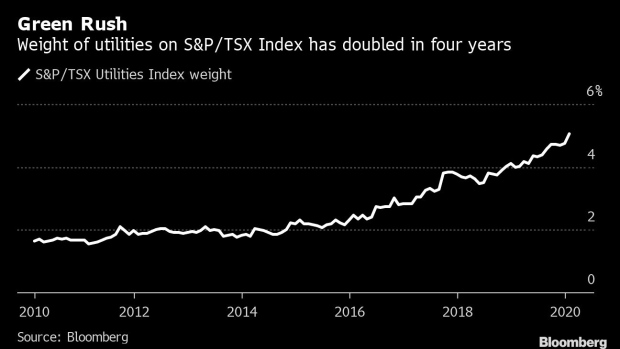 Some of the nation’s oldest utilities are turning themselves into renewable powerhouses with a bigger foothold in alternative energy. And they’re being rewarded in the stock market by traders scouring for favorable investments in the environmental, social and governance space.

“They are most definitely attractive because of the nature of the assets they own, which would be renewable assets,” Martin Grosskopf, money manager at AGF Investments Inc. said by phone. “There is absolutely appetite to get more exposure to carbon reductions and assets that are carbon-light.”

Last year, the S&P/TSX Composite Utilities Index was the second-best group of Canadian stocks -- surging 32% and gaining C$35 billion ($26 billion) in market value -- driven largely by a pullback in bond yields, increased appetite for low-volatility shares and improving balance sheets. That has continued in 2020. The remain in the No. 2 spot, after tech, as geopolitical tensions and a viral outbreak roil global markets.

Innergex Renewable Energy Inc., a renewable power producer, has soared 27% in 2020 after a 34% rally last year. Just this week, it announced a C$661 million partnership with Hydro-Québec targeting wind and solar projects.

Boralex Inc., an electricity producer with renewable energy power stations, is up 21% this year after a 45% climb in 2019. Algonquin Power & Utilities Corp., the regulated utility with sustainable energy assets is trading at the highest level since it was listed about 22 years ago.

While utilities have always been viewed as bond proxies in the stock market, Grosskopf says a shift is happening as the popularity of ESG investing climbs.

“Yield is still very important for assessing the value of a company like a utility but there is now an additional interest in the market regardless of the company’s spread over 10-years,” he said. “The dynamics are maybe changing a little bit.”

Investor optimism can been seen in a granular part of the stock market too -- the weighting of utility shares on the benchmark has doubled in four years.

Canada stands out as a prime target for foreign investors in the sector. With a scarcity of quality public companies in the pure-play renewable space, Canada has a handful of them with solid management track records that have been around for a long time.

“International investors from you name it from Europe to Asia to places like Australia have started to focus a bit more attention on some of these Canadian renewable names,” said Mark Jarvi, an analyst at Canadian Imperial Bank of Commerce, by phone.

As more companies commit to zero emissions, the esteem of carbon offsets increases, making a case for value creation in renewable power producers that historically hadn’t been priced in, Jarvi said.