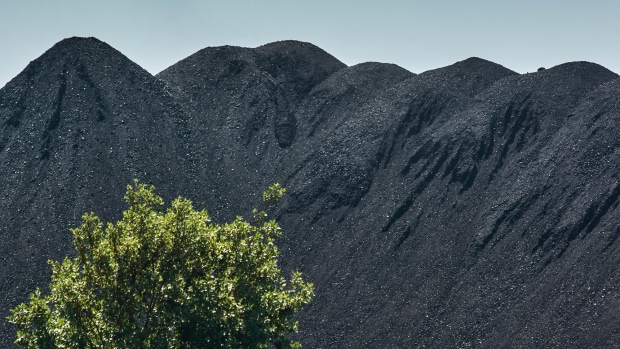 Coal piles next to a tree at the Phola coal processing plant in Ogies, South Africa, on Friday, Oct. 15, 2021. Envoys from some of the world’s richest nations met with South African cabinet ministers to discuss a climate deal that could channel almost $5 billion toward ending the country’s dependence on coal. Photographer: Waldo Swiegers/Bloomberg , Bloomberg

(Bloomberg) -- Europe is neglecting a key financial investing tool in its efforts to promote sustainable capital flows, according to the association representing the region’s biggest banks and asset managers.

Rules governing environmental, social and governance investing have yet to reflect the potential of securitization to support a green recovery, according to the Association for Financial Markets in Europe. The group says that re-bundling loans would significantly increase the amount of capital available for sustainable projects. The problem, it argues, is that current rules are too strict on assets that aren’t green yet, but will be after a transition process.

“There isn’t enough green collateral out there to securitize,” Pablo Portugal, managing director for advocacy at AFME, said in an interview. “We’d like to see more securitization and more ESG securitization.”

While the EU is leading the way in a global ESG boom, the evolution of the securitization market is the “main exception” to that trend, according to AFME. It estimates that ESG securitization represents a “nascent” market worth just 5.2 billion euros ($6.1 billion) in the first half of this year. But part of the reason it’s so small is because it’s missing out on financing for projects seen as aiding the transition away from fossil fuels, AFME said.

It’s the latest pressure campaign to include transition assets -- such as fossil fuels -- in Europe’s green taxonomy. That’s as a battle over the role of gas picks up, with defenders pointing to the latest energy crisis to underline their point. Coal dependent countries in the bloc want to see gas included, while critics say doing so could jeopardize efforts to reach net-zero CO2 emissions by 2050.

Expanding the taxonomy to make it easier to include securitization does raise questions about the potential for greenwashing. Financial market participants see it as a way to mobilize large sums of money to help fund the shift to carbon neutrality. Detractors have criticized financial engineering as obscuring the final destination of that money. The European Securities and Markets Authority says it’s time to impose new rules to protect investors from complex ESG instruments.

The EU has introduced legislation that aims to curb the mislabeling of ESG products through disclosure and standards. AFME is calling for a one-year lag between corporate disclosures and the deadline for banks to report so the industry has a better chance of providing accurate information to stakeholders. The EU accounted for over half of global ESG bond issuance in the first half of 2021, according to AFME.

AFME’s members include Europe’s biggest banks, asset managers and law firms, as well as regulators. Bloomberg LP, the parent of Bloomberg News, also is a member of AFME.