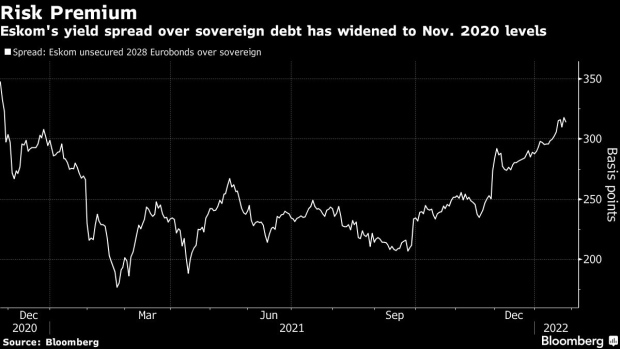 Vapour rises from a chimney at the Eskom Holdings SOC Ltd. Tutuka coal-fired power station in Mpumalanga, South Africa, on Thursday, Nov. 18, 2021. South Africa's energy department has said it will start preparing for the end of coal-for-power use in the country but cautioned that a retreat from the dirtiest fossil fuel must take account of the impact on the economy and the people who depend on it for a living. , Bloomberg

Eskom bonds are priced cheaply and there’s been a slowdown in new issuance in the market, which should help narrow spreads, according to analysts Alexander Rozhetskin and Eric Ollom. Their trade idea is to buy Eskom’s unguaranteed tranche of 2028 notes, which are trading at a premium to South Africa’s sovereign securities.

“We see scarcity value in bonds like Eskom,” they wrote in a note to clients.

They acknowledge Eskom’s ailings, saying there’s no good news on the horizon. The company is in the middle of a restructuring aimed at returning it to profit and lightening its 392 billion rand ($25.4 billion) debt load.

Yields on the utility’s unsecured 2028 dollar bonds have climbed 70 basis points this month to 7.69%. That’s widened the spread versus similar-maturity sovereign debt by about 30 basis points to 320.

The median level for the two is closer to 240 points, Citigroup said. The analysts will target the difference between Eskom and the sovereign, implying some 70 points of upside, with a stop loss of 400 points.