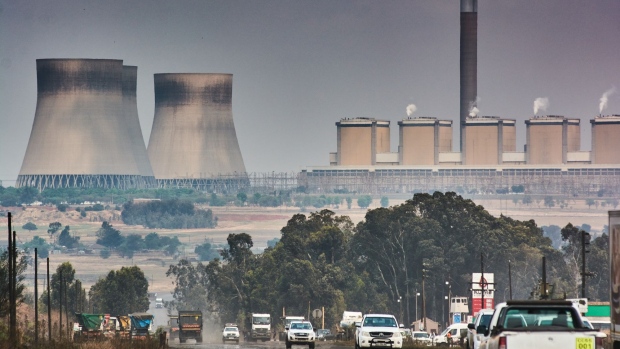 Traffic passes the Kendal coal-fired power station, operated by Eskom Holdings SOC Ltd., in Mpumalanga, South Africa, on Thursday, Sept. 30, 2021. South Africa is under pressure to cut its dependence on coal -- which accounts for more than 80% of its power generation – but it needs finance to facilitate the transition to cleaner energy. Photographer: Waldo Swiegers/Bloomberg , Bloomberg

South Africa’s indebted Eskom Holdings SOC Ltd. has started court proceedings to review the regulator’s rejection of a five-year price plan that outlines how much the utility can charge electricity consumers.

The National Energy Regulator of South Africa on Sept. 30 called for a pricing methodology review and discarded the so-called MYPD 5 revenue application of Eskom, which is unprofitable and struggles under about 400 billion rand ($27 billion) of debt. “This is impossible both from a legal process and timing point of view,” the utility had said.

The regulator and Eskom have brought a number of disputes to court over what the company can charge for electricity.

The latest court action “is the only available option to avoid extremely serious and negative consequences for Eskom and by necessary consequence to National Treasury,” the utility said.