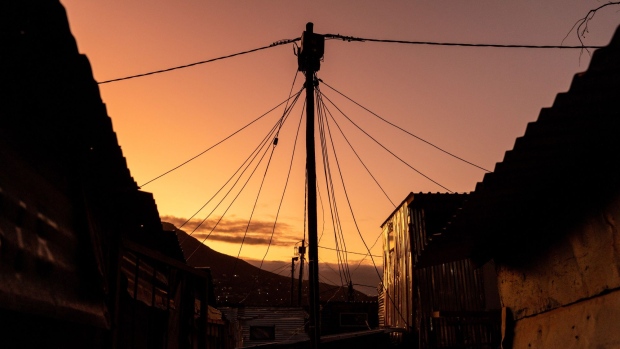 Electrical power lines above informal housing in the Imizamo Yethu settlement in the Hout Bay district of Cape Town, South Africa, on Wednesday, Aug. 3, 2022. South Africa's state-owned power utility Eskom Holdings SOC Ltd. warned it may have to implement rolling blackouts for the first time in more than a week due to a shortage of generation capacity. Photographer: Dwayne Senior/Bloomberg , Bloomberg

(Bloomberg) -- South Africa’s Eskom Holdings SOC Ltd. cut 4,000 megawatts from the grid on Wednesday and will continue to do so until further notice because of further breakdowns and delays in returning generating units to service, the utility said on Twitter. That makes it 38 straight days of electricity rationing — the longest stretch of power cuts yet.

Engie SA expects to move forward with three South African solar projects this week as the nation struggles to accelerate a program to add renewable power.

The French developer plans to sign power-purchase agreements for a total of 225 megawatts of solar projects after being selected as a preferred bidder in the so-called fifth bid window that called for 2,600 megawatts of renewable energy, according to Mohamed Hoosen, Engie’s managing director for renewables in Africa, Middle East and Asia.

A senior South African ruling party official who has his sights set on becoming the nation’s next deputy president, and maybe even the top job, says he has a plan to end government prevaricating and fix the struggling economy.

Paul Mashatile, the party’s treasurer, bills himself as a can-do, investor-friendly politician. He wants the government to implement reforms needed to stimulate economic growth, including turning around state power utility Eskom, which has subjected the nation to rolling blackouts since 2008.

ABB Ltd., a Swiss industrial company, agreed to pay $315 million to resolve a multinational investigation into bribery of a high-ranking official at Eskom, the US Justice Department said Friday.

ABB bribed the Eskom official between 2014 and 2017 to corruptly obtain confidential information and win lucrative contracts, Assistant Attorney General Kenneth A. Polite Jr. said in a statement. ABB engaged subcontractors associated with the official and made payments intended, “at least in part, as bribes,” the statement said. “ABB worked with these subcontractors despite their poor qualifications and lack of experience.”

“We don’t have it,” Godongwana said in an interview at Bloomberg’s office in Johannesburg.

The National Treasury said in October’s budget update that the government may shift between one-third and two-thirds of the power company’s debt of about 400 billion rand ($23 billion) onto its own balance sheet. Details including the amount and terms of the transfer are expected to be announced in February’s budget.