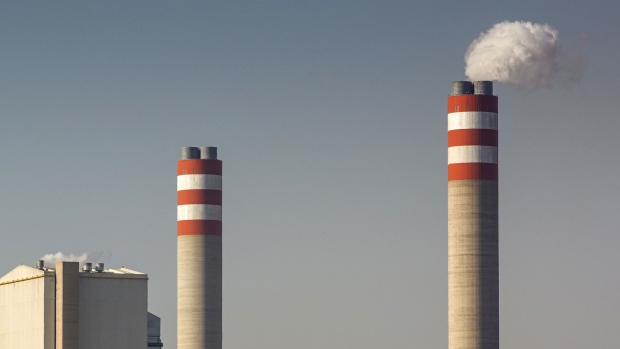 Emissions rise from the Eskom Holdings SOC Ltd. Kusile coal-fired power station near Witbank in Mpumalanga, South Africa, on Wednesday, June 12, 2019. Air pollution in the biggest towns in Mpumalanga is regularly higher than that in Beijing and Jakarta, two of the most polluted cities in the world, according to AirVisual, an air-quality monitoring app. Photographer: Waldo Swiegers/Bloomberg , Photographer: Waldo Swiegers/Bloomberg

(Bloomberg) -- Eskom Holdings SOC Ltd. is proposing a “highly concessional” financing plan to help build about 400 billion rand ($27 billion) of energy infrastructure to help the South African utility move away from the use of coal, according to company’s energy transition head.

Eskom is proposing a “multi-tranche, multi-year facility” that would have funds advanced on a pay-for-performance basis as progress is made, Mandy Rambharos, the head of Eskom’s Just Energy Transition department, said in a presentation on Thursday. The U.S., U.K., France, Germany and the broader European Union have indicated interest in supporting the plan.

Gas infrastructure that Eskom has outlined as part of replacing its coal capacity could include a 3,000 megawatt plant in Richards Bay on the north east coast and 1,000 megawatts plant as part of a repurposing of the coal-fired Komati power station.

The use of gas is “not my favorite option” and would be used as a stop gap as renewable energy and battery storage improves and could potentially be switched for hydrogen in a decade, she said.