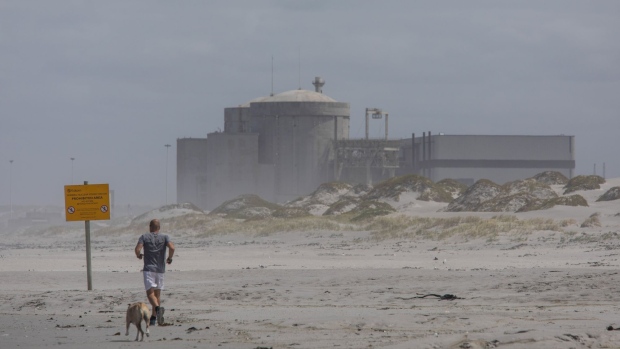 The Koeberg nuclear power station, operated by Eskom Holdings SOC Ltd., viewed from Melkbosstrand beach in Cape Town, South Africa, on Wednesday, Nov. 25, 2020. The decision to begin installing new steam generators at the Koeberg plant near Cape Town underscores state-owned Eskom’s confidence that it will win approval to prolong production of low-emissions nuclear power into the middle of the century. , Bloomberg

(Bloomberg) -- South African power utility Eskom Holdings SOC Ltd. is examining how the suspension of a pact that enables it to import nuclear fuel components from the US will affect its sole atomic plant.

The Agreement for Cooperation in Peaceful Uses of Nuclear Energy between the US and South Africa expired on Dec. 4. That resulted in Westinghouse Electric Co. losing its license from the US Nuclear Regulatory Commission to export fuel-assembly components to Eskom’s Koeberg plant near Cape Town.

“Eskom is exploring the implications of the withdrawal of the US NRC approval for Westinghouse, and what is needed to enable them to continue supplying fuel,” the utility said in a reply to questions. Eskom doesn’t anticipate that it will “have to establish new fuel contracts due to this current issue” and no nuclear fuel shortage is expected at Koeberg in the immediate future, it said.

The development may frustrate Eskom’s efforts to end record nationwide power outages that are crimping the economy. The matter may be raised with US Treasury Secretary Janet Yellen, who is visiting South Africa this week.

US President Joe Biden was poised in August to extend the existing agreement, but it was still allowed to expire. South African Department of International Relations & Cooperation spokesman Clayson Monyela and an energy department spokesperson weren’t immediately able to comment.

The Westinghouse license authorizes it to export fuel components to Sweden for fabrication into completed assemblies, and for those to be subsequently shipped to South Africa for use in both of Koeberg’s reactors, according to the NRC order.

Westinghouse and France’s Framatome have been maintained as nuclear fuel suppliers for the plant, according to Eskom. The US company has already delivered the material that will be loaded during maintenance on one unit that’s currently under way, while fuel for the second was provided by the French firm, it said.

“The contracts with Westinghouse and Framatome cover the fuel needed beyond these two outages,” Eskom said.