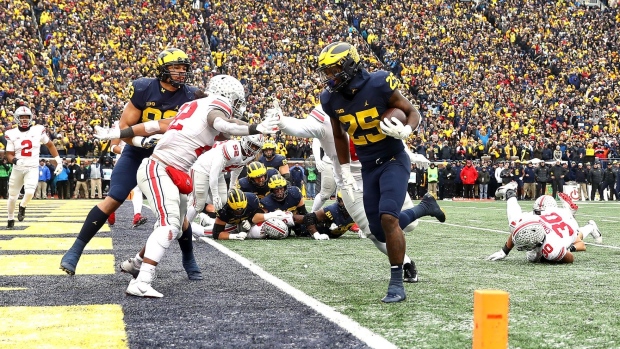 Hassan Haskins of the Michigan Wolverines carries the ball into the end zone for a touchdown against the Ohio State Buckeyes in Ann Arbor, Michigan in Nov. 2021. , Photographer: Mike Mulholland/Getty Images

(Bloomberg) -- CBS and NBC are nearing deals to join Fox as a broadcaster for Big Ten sports next year after ESPN bowed out of the bidding, according to people familiar with the matter.

The conference is expected to sell three separate packages, with each broadcaster getting different Saturday time slots. Paramount Global’s CBS and Comcast Corp.’s NBC are finalizing agreements to pay about $350 million annually, the people said. ESPN, owned by Walt Disney Co., declined to pay about $380 million a year for a package, ending a longtime relationship with the conference, another person said.

In total, the new Big Ten contracts are expected to top $1 billion or more. They will replace an expiring deal under which Fox Corp. and ESPN were paying $430 million a year combined. Fox, which owns 61% of the Big Ten Network through a joint venture, renewed its TV rights with the conference in April.

Big Ten football games from schools like University of Michigan and Ohio State University routinely draw large television audiences. Notwithstanding the conference’s name and Midwest roots, the Big Ten now has 14 members across states stretching from New Jersey to Nebraska.

ESPN’s decision to walk away from the bidding was first reported by the Sports Business Journal. ESPN has carried Big Ten football and basketball for 40 years, the publication said.

The cost of the new Big Ten deal was expected to be far more than the previous one, especially after the conference said in June that the University of California at Los Angeles and the University of Southern California, which have large fan bases and famous sports histories, will join in 2024.

NBC is expected to get the prime-time window of Big Ten games -- the network already airs Notre Dame games on Saturday afternoons. NBC’s Peacock streaming service will get some exclusive Big Ten games, one person said.

Winning the Big Ten rights is seen as particularly important for CBS, which will lose Southeastern Conference football when ESPN takes over in 2024. ESPN agreed to pay $300 million per season to show SEC sports. ESPN also has media-rights deals with the Atlantic Coast Conference and the Pac-12.