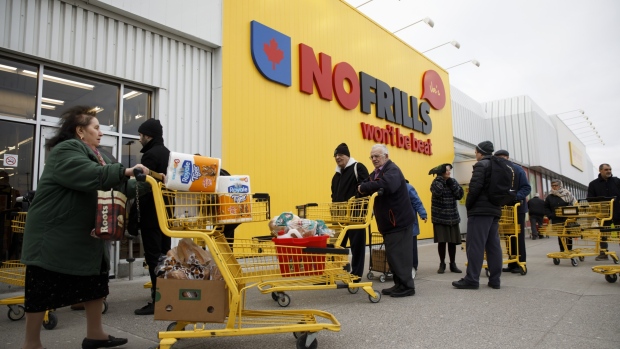 Toronto Uber driver Jeff Perera has spent the last few weeks sanitizing door handles, seats and belt buckles each time a passenger exits his car to stop the spread of a novel coronavirus.

But he may soon get a break from scrubbing because he's debating dropping his driving gig.

"I'm taking precautions, but I don't want to be a carrier passing coronavirus on," said Perera, who has driven on-and-off for Uber for almost four years, while working as a professional speaker.

"I had this one lawyer I was going to take to Liberty Village to pick up some weed and he's just one of these people who was saying (COVID-19) is all a hoax, it's overblown and it's not that big of a deal. That was one of my last rides and that made me really angry and I thought I don't know if I can do this."

Such situations are familiar to Perera' fellow drivers, health-care and transit workers, cleaners, couriers and supermarket staff, who have been deemed essential by many provinces.

They head into workplaces while others have the luxury of toiling away from home.

Their jobs put them in the path of the unruly virus by exposing them to scores of people, who may unknowingly be carrying COVID-19, and surfaces, where experts say it can linger.

It's stories like those that have worried the family of Stanley Maranion, a cleaner at Tsawwassen Mills, a shopping mall south of downtown Vancouver.

When he hops off the bus at the mall, clad in gloves and a mask, he now often finds it empty. Most stores have closed, but a South St. Burger and Dollarama remain open.

"I feel better because the mall isn't that busy and with less people going, I feel safer," he said. That emptiness is far from what Thomas Hesse, president of the United Food and Commercial Workers Local 401, hears from the 32,000 workers from companies like Cargill Inc., JBS Canada and Safeway, who the union represents.

He recently encountered a grocery clerk who hauls heavy loads of flour through busy aisles, while fretting about an ill family member in Arizona who can't access health care and fighting with his ex-wife over childcare because schools are closed.

"I talked to one employee whose brother recently received chemotherapy and she lives with her brother," he said. "She's torn about coming to work because there's a risk she might take (the virus) home, exposing her brother."

The places where these workers are employed are encouraging staff to wash their hands constantly. Others prod staff to don a mask or gloves, which comes with a new challenge.

"We're being as vigilant as possible and trying to make sure that everything's on order, but there's shortages (on sanitizer, gloves and masks) all over North America, so we're doing our best," said Devon Almond, the owner of Calgary cleaning company Time to Shine.

Some of his church, dental office, restaurant and office building clients have slashed or reduced cleanings, but none of his roughly 60 workers have refused work yet.

Markham, Ont.-based Anthony Cappuccio juggles stocking produce at a supermarket with working as a restaurant cook.

He isn't worried about catching the virus at work, but wishes shoppers wouldn't cram stores and snatch up more groceries than they need.

"We can't keep up with demand because every time we have canned goods, even if you put a limit on it, people are gonna buy it, and with all of our stuff being delayed a bit because of the initial huge rush shopping everyone did, it's more difficult," he said.

Grocers like Loblaw Companies Ltd., Sobeys Inc. and Metro Inc. are installing plexiglass shields in front of cashiers, whose pay they recently raised by 2 dollars an hour. Other retailers have stopped customers from dining-in or paying with cash as they keep up with the demands of delivery.

Cappuccio's restaurant job is far quieter. He used to work 45 hours a week there and now, he says, he's working maybe 20.

"We laid off most of our staff except for me and three other people just to keep it running, but honestly, I'm standing around, no one wants take-out food," he said.

He worries about laid-off co-workers, who rely solely on the restaurant to pay bills. Cappuccio, however, counts himself lucky because he lives with his parents and the grocery sector is in demand between Walmart and Loblaw looking to immediately hire thousands.

Uber driver Perera has been less calm as he mulls whether to park his car.He's weighed how much he enjoys helping health care workers get to their jobs with his own situation including a mother in her seventies and his brother's babies he doesn't want to endanger.

He doesn't know what he'll do instead, since his speaking work has dried up because COVID-19 has forced the cancellation of events.

"I'm debating doing Uber Eats, but there are so many people doing that that I can't see me having much more financial success doing that but I guess it's safer," said Perera, who doubts he will qualify for employment insurance or other government support because he is self-employed.

"I wanted to look into Amazon, maybe doing deliveries for them. I just hope I can get something going."