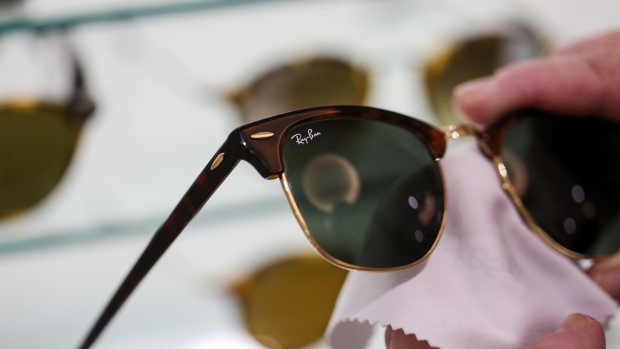 A employee cleans a pair of Ray-Ban Clubmaster luxury sunglasses, manufactured by Luxottica Group SpA, in an opticians in London, U.K., on Monday, Jan. 16, 2017. French lensmaker Essilor International SA agreed to buy Luxottica Group SpA, the maker of Ray-Ban sunglasses, for about 22.8 billion euros ($24 billion) in stock, combining the largest manufacturer and retailer in eyewear. , Bloomberg

(Bloomberg) -- Activist investor Dan Loeb plans to call for governance changes at Ray-Ban maker EssilorLuxottica SA after building a stake in the company, according to people familiar with the matter.

Loeb’s Third Point has a more than 1.2% holding in the company and aims to help break a stalemate between its Italian and French owners, the people said, asking not to be identified because the matter is private. The two factions have been clashing over governance issues such as naming a chief executive officer.

Loeb has met with with EssilorLuxottica Chairman Leonardo Del Vecchio and expressed his views about how the eyewear maker could resolve the contentious matters, the people said. Third Point also wants the companies to start realizing the promised 600 million euros ($665 million) in synergies that they said were possible when the deal was announced, one of the people said.

Representatives for Third Point and EssilorLuxottica declined to comment, as did a spokesman for Del Vecchio’s Delfin, an investment vehicle that’s the largest investor in the combined entity with about a 32% stake.

Third Point’s stake is worth about 670 million euros. Loeb is considering increasing it further, the people said.

In May, EssilorLuxottica faced down a shareholder revolt as investors rejected a proposal to name two new independent board directors to the board.

The company has been plagued by a power struggle since French lens-maker Essilor International Inc. agreed to combine with Italian counterpart Luxottica Group SpA in 2017. Under the terms of the merger, both companies would have equal representatives on the board until its 2021 annual general meeting.

Tensions have flared up since after Del Vecchio said he’d like to appoint his deputy as CEO soon after the merger was concluded. Vice Chairman Hubert Sagnieres, who came from French lens-maker Essilor, countered that the Italian was making false statements in an effort to seize control of the group. Del Vecchio filed for arbitration from the International Chamber of Commerce in March, arguing that Essilor executives were violating the term of the deal and the company’s corporate governance.

Del Vecchio and Sagnieres subsequently agreed to transfer power to their respective deputies while seeking a new chief executive officer.

--With assistance from Daniele Lepido.

To contact the editors responsible for this story: Liana Baker at lbaker75@bloomberg.net, ;Chad Thomas at cthomas16@bloomberg.net, Thomas Mulier, Eric Pfanner