Estee Lauder Cos. reported quarterly sales that came in short of analysts’ estimates despite early signs of travel bouncing back.

Sales rose in every region but didn’t meet expectations, with demand for makeup still stifled as customers don’t see many occasions to wear cosmetics like lipstick. Global net sales for the fiscal third quarter ended March 31 rose 16 per cent to US$3.86 billion, or 13 per cent excluding currency fluctuations, the company said Monday in a statement. 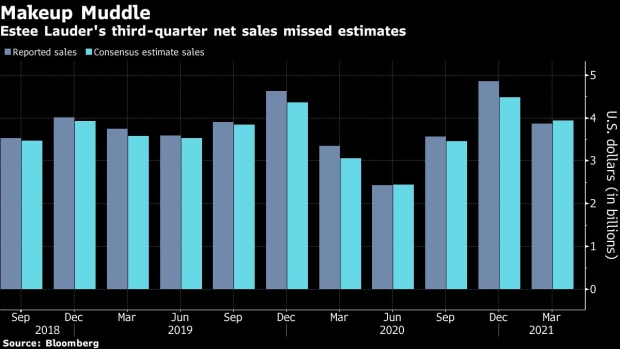 Net sales for makeup declined across nearly all of Estee Lauder’s brands. Products like foundation and lip gloss have been particularly hurt by the pandemic, with workers yet to fully return to offices during the day and nightlife still muted in many countries around the world. The only region that saw growth in makeup last quarter was Asia.

The shares fell as much as 4.6 per cent in New York trading Monday. They had climbed 18 per cent this year through April 30.

Skin care continues to perform well. In February, Estee Lauder company agreed to increase its stake in Deciem, owner of the Ordinary cosmetics brand, for about US$1 billion, and plans to buy the remaining interest in three years. The transaction is expected to be completed in May.

The cosmetics giant said signs of a travel recovery were apparent, with shoppers returning to stores in transit hubs as tourism starts to inch back after grinding to a near total halt amid travel restrictions and shutdowns. Estee Lauder’s global travel retail business for the quarter grew year-over-year despite a lack of international travelers. That includes stores in places like airports and train stations.

“We expect the momentum in our sales growth to build in the fourth quarter of fiscal 2021, not only from easing comparisons but also fundamental strength, as we drive recovery,” said Chief Executive Officer Fabrizio Freda.

The company expects reported net sales to climb as much as 12 per cent this fiscal year, or as much as 10 per cent excluding currency impacts.