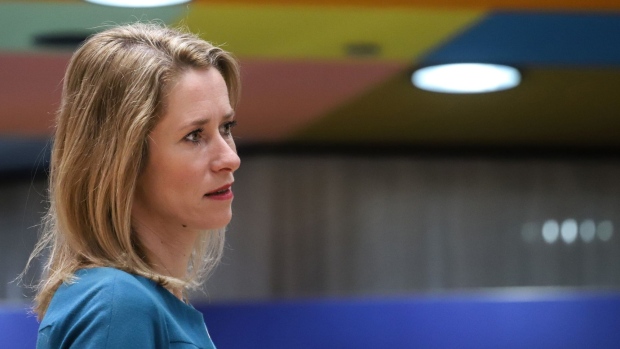 Kaja Kallas, Estonia's prime minister, at a European Union leaders summit to discuss security and defense at the European Union (EU) Council headquarters in Brussels, Belgium, on Friday, March 25, 2022. The U.S. and the European Union will push to boost supplies of liquefied natural gas to European countries by the end of 2022 in a bid to displace Russian gas, a political framework that now leaves companies to sort out the details. , Bloomberg

(Bloomberg) -- Estonian Prime Minister Kaja Kallas warned of the grave consequences of any future Russian aggression in the Baltics ahead of an important NATO summit next week.

Speaking to journalists in Tallinn on Wednesday, Kallas said NATO’s “tripwire” strategy for defending the three Baltic countries of Estonia, Latvia and Lithuania, under which allies would arrive with reinforcements only after a Russian invasion and take back territory, was outdated after the war in Ukraine.

“If you compare the size of Ukraine and the Baltic countries, then it would mean a complete destruction of our countries, of our culture,” Kallas said. “Those of you who have been to Tallinn and know our Old Town and the centuries of history and culture that is here, that would all be wiped off from the map, including our people, our nation.”

The Estonian prime minister was speaking ahead of NATO’s Madrid Summit next week, where bolstering the eastern flank in light of Russia’s invasion of Ukraine will be a major point of discussion. NATO officials have conceded that the model in the Baltics is no longer a sufficient form of defense.

Under those plans, the roughly 1,500 multinational troops on the ground have served as an immediate line of defense if ever there were an attack, buying some time for additional NATO reinforcements to fly in. The multinational dimension of those battle groups sought to add another element of deterrence, given that multiple nations would be affected if the battle group came under attack.

Kallas’s comments come as tensions between the Baltics and Russia rise. The Estonian Ministry of Defense has said that Russia is simulating missile attacks against the Baltic country in an ongoing military exercise and that helicopter intrusions into Baltic airspace have occurred in recent days.

“The tripwire concept doesn’t really work,” Kallas said. “We have to have the correct plans to defend ourselves from the first day together with our allies so that the aggressor would not even think in our direction.”