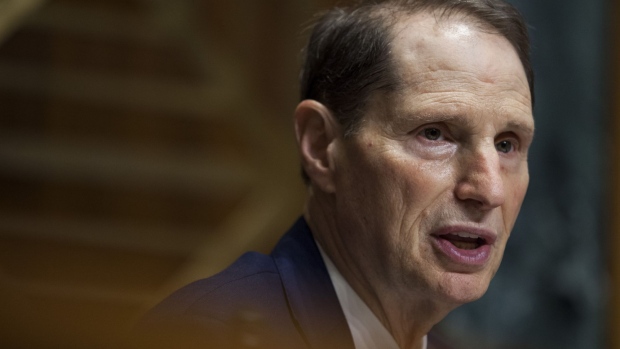 (Bloomberg) -- Amid the deluge of headlines in the past few days about congressional proposals to boost taxes on companies and the wealthy is one that would affect regular investors -- and potentially alter the entire U.S. fund landscape.

Draft legislation released by Senate Finance Committee Chairman Ron Wyden of Oregon on Friday featured a repeal of a key tax advantage for the $6.8 trillion U.S. exchange-traded fund industry. The move was tucked in along with a series of proposals to tighten tax reporting requirements around business partnerships, and wasn’t highlighted in Wyden’s accompanying press release.

The initiative would at a stroke end a system of deferred taxes on capital gains linked to ETFs, bringing forward the tax burden for investors of all stripes. That will make it all the tougher to win inclusion in the final version of tax hikes that Democrats are now assembling to help pay for a social-spending package that’s been penciled in at $3.5 trillion.

“The industry will push back hard” at the proposal, said Ben Johnson, director of global ETF research at Morningstar. “It’s hard for me to see this getting popular support -- in large part because it’s a benefit that is universal, so all investors, large, small and in-between, that are investing taxable money benefit from ETFs’ tax efficiency.”

The measure would bring in $205 billion over a decade, according to preliminary figures from the Joint Committee on Taxation. It would take effect in tax years beginning after Dec. 31, 2022. Wyden said in a statement Tuesday that, “This proposal exempts retirement accounts entirely.”

Wyden’s proposal was made before his committee delivers its draft of tax measures for inclusion in the budget-reconciliation bill that will form the bulk of President Joe Biden’s economic agenda.

The effort would address an advantage for ETFs that stems from a law dating back to the Nixon administration. The law exempts so-called regulated investment companies, or RICs, from recognizing a taxable gain on assets if shareholders are paid out “in kind.” In other words, if withdrawing investors are paid in securities like stocks rather than in cash.

ETFs are structured so that money flows in and out via facilitators known as authorized participants, and redemptions for a fund almost always take place in-kind. That means that if there are enough withdrawals, an ETF can avoid recognizing taxable gains entirely. Rather than paying a tax on a fund’s gains each year, investors usually don’t pay anything until they sell their ETF.

“Because ETFs are pass-through vehicles, by definition every cent of the increased tax flows through directly to the shareholders -- not all of whom are filthy rich,” Jeremy I. Senderowicz at law firm Vedder Price said by email.

Some ETF managers use so-called heartbeat trades to increase the amount of withdrawals and erase all of a fund’s taxable gains. A friendly bank moves a pile of cash into a fund before almost immediately pulling it out, allowing the ETF to shed stocks that have gone up in value without incurring a taxable gain.

“This particular proposal simply applies the same rules already in place for corporations to regulated investment companies, so wealthy investors can no longer avoid all tax on their gains,” Wyden said in his statement Tuesday. “We’re only talking about the taxable accounts of the wealthiest investors.”

A summary of Wyden’s proposal mentions heartbeat transactions in particular, although he proposes to erase the entire provision that allows RICs to avoid recognizing gains. The proposal “would repeal the exception for RICs, aligning RICs with the general requirement that gain be recognized upon distribution by a corporation of built-in gain property,” the summary said.

That’s a potential industry game-changer. While ETFs tend to have several advantages over mutual funds -- like the ability to trade all day and generally lower fees -- research has shown the tax loophole is a key driver in the long-term trend of cash flowing from mutual funds into ETFs. As that has gathered pace, U.S. issuers are this year for the first time directly converting mutual fund assets into ETFs.

The final package of tax hikes, including ones on corporations and wealthy individuals, may takes weeks to develop.

“Wyden right now is coming up with his own provisions that could fit into that” final legislation, said Nathan Dean, a government analyst at Bloomberg Intelligence. “Think of this as something to have in his hip pocket when the Democrats start negotiating.”

The odds may be against the ETF-related legislation ever passing, Dean said. First, because so much negotiation is still ahead, and second because it would directly impact ETFs, which are very popular with consumers. However, with so much currently up for discussion, it could slip through as a smaller provision not well-understood by lawmakers, he said.

Senderowicz thinks the legislation has a low chance of succeeding because of the potential damage to many small investors -- but he also doesn’t rule it out.

“It’s impossible to disguise the incidence of the tax increase and thus lends itself well to political attacks,” said Senderowicz. “But if it’s a choice between it and the entire reconciliation bill coming apart?”