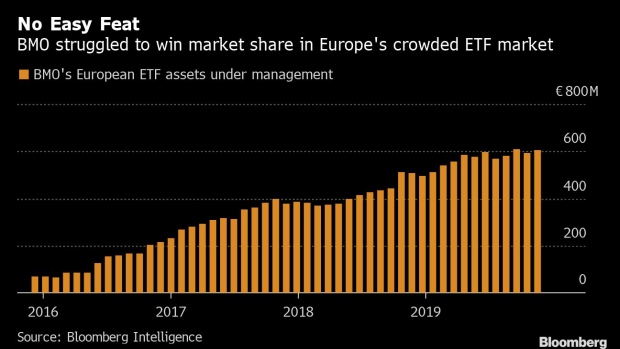 BMO Global Asset Management is closing its exchange-traded funds business in Europe after a four-year struggle for market share in an industry dominated by large firms and low-fee offerings.

The Montreal-based manager, which oversees US$669 million across 13 funds, plans to shut the ETFs on or around Jan. 21, according to a regulatory notice. The move was prompted in part by “the current level of assets under management and projected asset growth in the current market environment,” it said in the notice.

A spokesman for BMO said the closures will have “no material impact on BMO GAM’s wider investment proposition.”

Since listing its first regional products in 2015, the firm’s market share has flatlined at 0.1 per cent, compared with 45 per cent for BlackRock Inc. and 10.5 per cent for DWS Group, according to data compiled by Bloomberg Intelligence. New competitors are knocking on the door. Goldman Sachs Asset Management entered the European market this year, while WisdomTree purchased a specialist ETF business last year.

“It’s just a natural part of competition and firms rationalizing their line-ups,” said Athanasios Psarofagis, a European ETF analyst at Bloomberg Intelligence in London. “But it’s much harder for the little firms.”

Fee pressure is also ramping up, with the likes of Vanguard Group recently slashing costs on its passive products in the region. Paris-based Amundi SA rolled out nine products charging just 5 basis points earlier this year.

“This has been a big year for fee cuts, so I think they just saw the difficulty in competing there and scaling up,” Psarofagis said.

--With assistance from Akiko Itano.