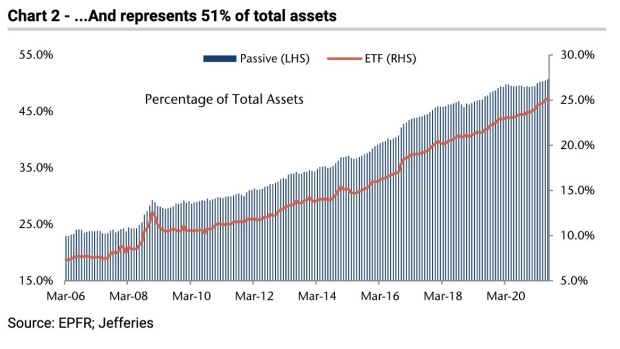 (Bloomberg) -- Welcome to the ETF Weekender, your round-up of the biggest and most interesting stories from one of hottest corners of global markets.

In this week’s edition: A new proposal threatens the tax advantage that helped fuel the U.S. ETF industry, two asset managers mull a mega-merger, and passive vehicles lose ground in the stock market.

These are the stories you need to read.

What happened: The chair of the Senate Finance Committee has put forward a plan that would end the famous tax advantage of ETFs.

Why it matters: The proposed measures are aimed at closing loopholes used by wealthy individuals and large companies to defer paying gains taxes. However, they would hit ETF investors of all stripes and have drawn a strong pushback from the industry. The significance of the draft was almost lost in the newsflow, as Democrats are also thrashing out new tax rates on everything from corporations to estates.

What happened:  Invesco is in discussions with State Street’s asset-management arm about a possible combination.

Why it matters: The tie-up would form a much more formidable third-place contender in the competitive world of passive fund management, a land of giants. While industry leaders BlackRock Inc. and Vanguard Group are significantly larger, the combination of State Street’s and Invesco’s third- and fourth-place franchises would narrow the gap by forging an institution with a roughly 20% market share.

What happened: The share of the stock market owned by passive funds has slipped to 20.1% of shares outstanding from 21.3% a year ago.

Why it matters: The decline marks the first drop in passive’s share since Jefferies began keeping track six years ago. A record number of initial and secondary offerings is behind the shift, but a decent performance by active managers this year could help sustain it. Meanwhile, even as passive slipped overall, ETFs’ share of the market almost doubled.

A glimpse at the Bloomberg Intelligence analysis available on the terminal.

Goldman Sachs is launching a new fund to challenge Cathie Wood's ARK ETFs, which have built up $42 billion in assets, joining a crowded field of issuers that have so far had limited success. About three dozen "future tech" ETFs have launched in the wake of ARK's breakout performance and subsequent flows, but none have matched ARK's growth, even when they've outperformed. For example, the BlackRock Future Tech ETF (BTEK) has only $21 million after a year on the market despite nearly doubling the returns of ARK's flagship.

Right now one of the hottest ETFs in the U.S., this $1.1 billion fund is one of only two linked to a rare and valuable raw material. They’ve both been surging in recent weeks alongside the commodity, but go back a decade and prices were far crazier.

That’s the answer. The question identifying this fund will appear in the next edition. Last week’s question: What is the Direxion Daily Financial Bull 3X Shares ETF, ticker FAS?