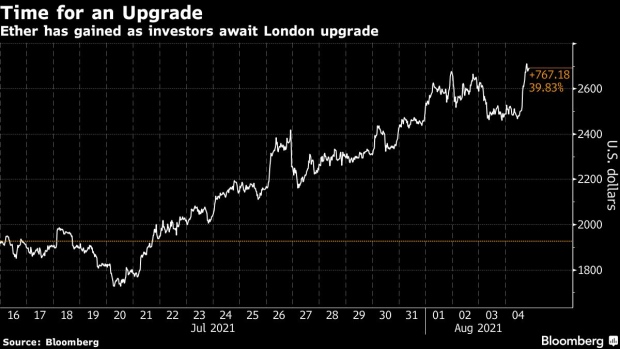 (Bloomberg) -- The digital currency Ether climbed to its highest level in nearly two months during the midst of a software upgrade that will trim the pace at which fresh tokens are minted.

The second-biggest cryptocurrency after Bitcoin rose as much as 10% on Wednesday to trade around $2,726, marking its highest point since early June. Bitcoin increased as much as 4.7% to $39,845.

In some ways, the optimism about the upgrade, known as London, resembles the hoopla surrounding past reductions in the block rewards for Bitcoin miners. While so-called halvings were planned events, Bitcoin typically rallied in anticipation that demand would either remain steady or increase while the pace of issuance slowed.

Still, Ether, like its cousin Bitcoin, is well off its record highs. It’s been trading within a 1,000-point range over the past two months, though the $1,700 level has acted as a floor during selloffs. From a technical basis, chartists see a bullish “W” pattern forming and the coin is on the cusp of breaking out of it.

Speculative excesses have been expunged and Ether has earned its status in the crypto ranks, said Bloomberg Intelligence’s Mike McGlone. While the upgrade could be behind Wednesday’s rally, he also likes it for the long-term. “I like the macro go-to platform builder foundation for Ethereum, per the digitalization of money and finance,” he said.

The London change, called EIP-1559, will split up the roughly 13,000 new Ethers issued on a daily basis for miner payment “gas fees” into three parts. One of these, the minimal or base fee that users pay to process transactions, will now be removed from circulation in a process known as burning. Some analysts have called it one of the most important upgrades in Ethereum’s history.

In addition, the supply could decline further once Ethereum moves to a different mechanism of verifying transactions, which could happen in the first quarter of next year. Such a new verification system will use computers supporting the Ethereum network to stake Ether coins instead of miners in most cases.

Matt Maley, chief market strategist for Miller Tabak + Co., said comments from U.S. Securities and Exchange Commissioner Gary Gensler about the crypto industry also served to soothe worries over potential regulation. “Even though he did make some cautious comments about regulation, his tone was very measured,” he said. “This calmed some fears in the crypto crowd about his long-term approach toward cryptocurrencies.”