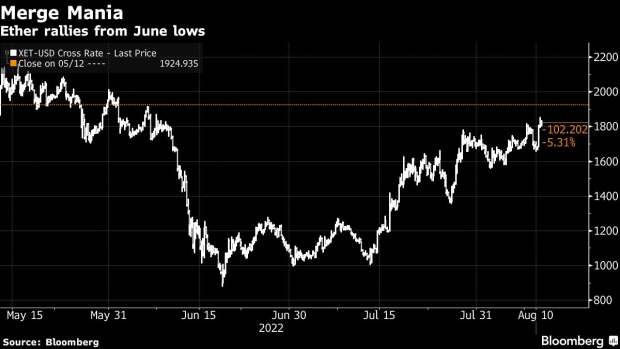 (Bloomberg) -- Ether jumped as much as 9% amid optimism over what is being touted as the final test before the much-anticipated software upgrade of the Ethereum blockchain network.

The native cryptocurrency of the most important commercial blockchain has surged about 67% since digital-asset prices bottomed in June. It has outperformed crypto market benchmark Bitcoin, which has increased around 15% during the same period.

The Goerli test -- supposedly named after a train station in Berlin -- is slated to commence late New York time on Wednesday and be instantaneous. It should be known whether the Goerli merge was a success within half an hour. The test network will be merging with a so-called proof-of stake test network -- a transition that will mimic, on a smaller scale, Ethereum’s transition to a more energy-efficient system for ordering transactions. If the Goerli test goes well, Ethereum core developers may on Thursday set the date for when the blockchain undergoes its long-anticipated software update, called the Merge.

“This is the last testnet Merge before we do the real thing --it is the final dress rehearsal,” said Ben Edgington, lead product manager at ConsenSys and one of the key developers working on the Merge. YouTube viewing parties are popping up inviting users to watch the Goerli merge.

Developers have been working on the Merge software upgrade for years, and it’s been delayed many times as unexpected issues came up. Currently, it’s expected to take place in September, as on Sept. 19, an ominous-sounding difficulty bomb -- code that should within weeks make the current Ethereum network unusable -- should go off, pushing for the migration to the new proof-of-stake system.

In proof-of-stake, so-called validators use their stacks of Ether to order transactions on the network. Currently, powerful computers solve complex puzzles to accomplish the same task using more energy.

The Merge is expected to be a nail biter. Ethereum is the most important commercial highway in crypto, and any disruptions could cost billions and impact billions of users. The chain supports more than 3,400 active decentralized apps, allowing for everything from gaming to trading. Ether has a $223.5 billion market value, according to CoinMarketCap.