Could cryptos be eco-friendly? Bitcoin has to get off 'religion' around mining: Ripple founder

Cryptocurrency enthusiasts are scaling up price targets for Ether after the second-largest token’s record-breaking run, an echo of the unbridled optimism that accompanied an earlier surge in Bitcoin.

The token affiliated with the Ethereum blockchain -- a digital ledger popular for financial services and sales of so-called cryptocollectibles like online art -- is up about 1,500 per cent in the past year and hit a new peak of US$3,455 on Tuesday.

The climb is stirring predictions of more gains ahead even as some technical indicators flash warnings that the rally may be overextended. Crypto proponents argue investors are now looking beyond Bitcoin to Ether and other tokens despite warnings of a stimulus-fueled mania in the sector.

“The market is realizing how fundamentally undervalued Ether is given all the development activity on the network,” said Vijay Ayyar, head of Asia Pacific at crypto exchange Luno Pte. “While one may think Ether has risen a lot, when you compare it to Bitcoin, there is a long way to go.”

“Ether will have much volatility, similar to Bitcoin, but can increase in value as more institutional investors become aware of it,” Pat LaVecchia, chief executive officer of crypto broker Oasis Pro Markets LLC, wrote in an email. Ether at US$25,000 is possible over the next few years, he said. 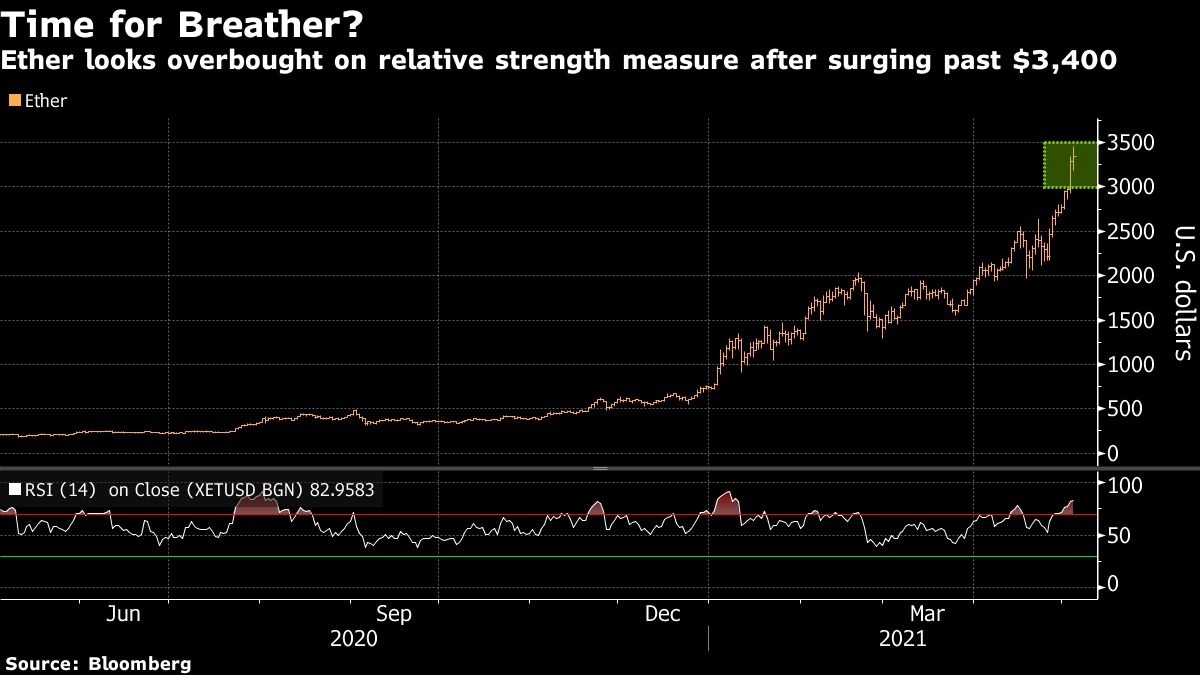 Optimists typically cite Ether’s use in applications on the Ethereum blockchain, as well as upgrades to the network to make it more efficient, as among the reasons for their bullishness.

In the futures market, Ether volumes are getting closer to those of Bitcoin contracts, even though CME Group Inc. only launched the former in February.

Still, there are indications that Ether’s rally is getting stretched. The token’s 14-day relative strength index has risen above 70 to the highest since January, signaling it may have climbed too far, too quickly.

Luno’s Ayyar said any run like Ether’s is bound to correct, but added that he views its long-term outlook as “very healthy.”