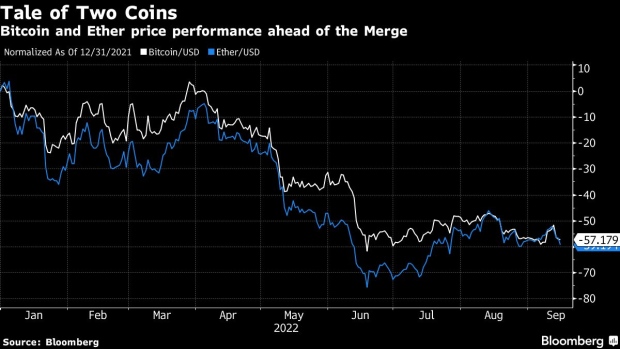 (Bloomberg) -- Ether led digital assets lower after a groundbreaking software upgrade of the token’s underlying network turned into what some market observers labeled a “sell-the-news” event.

The second-largest token dropped as much as 3.8% on Friday and was trading around $1,475 as of 12:40 p.m. in Singapore following a more than 6% slide Thursday. Ether is paring a rally since mid-June sparked in part by optimism about the Ethereum update -- the Merge -- to slash the network’s energy use.

“Now the excitement around the Merge is done, and we don’t have a catalyst for Ethereum in the short term,” said Martha Reyes, head of research at BeQuant, crypto exchange and prime broker. “It would be natural to expect a bit of rotation back” into Bitcoin, Reyes added.

Bitcoin dropped as much as 1.4% earlier and was trading below $20,000. Smaller coins such as Avalanche, Polygon and Solana also wavered.

Ethereum’s revamp makes it vastly more energy efficient and paves the way for it to scale up and become quicker, the network’s developers have said. The move to a so-called proof-of-stake approach from proof-of-work was years in the making and seems to have gone smoothly, though hiccups remain possible.

“The Merge event definitely was a success,” Preston Van Loon, co-founder Prysmatic Labs and an Ethereum developer, said on Bloomberg Television. “What we will see over time is, do the metrics hold up? The switch to proof-of-stake has really unlocked the next stages of upgrades.”

Crypto prices have tumbled this year along with other riskier investments, weighed down by tightening monetary policy to fight high inflation. The MVIS CryptoCompare Digital Assets 100 Index has shed almost 60% in 2022.

The Merge, however, is viewed as a potential longer term catalyst for Ether as it improves the environmental profile of Ethereum.

“Lots of extra demand will probably come to the network via financial institutions, many of which have really committed to getting busy on the Ethereum network in terms of understanding the technology and even potentially running some of the infrastructure,” Joe Lubin, the founder of ConsenSys and a co-founder of Ethereum, said in an interview Thursday.