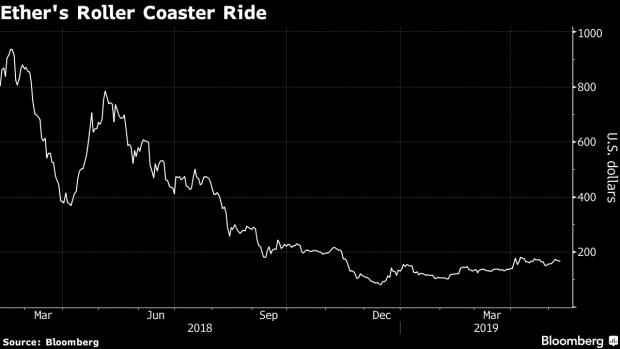 (Bloomberg) -- The turmoil surrounding Tether and Bitfinex, both of which are ensnared by allegations of wrongdoing, isn’t likely to subside, said Joseph Lubin, a co-founder of Ethereum and founder of crypto-related software company ConsenSys.

“It seems like a really big mess that probably won’t get better,” said Lubin during an interview at the sidelines of the Fluidity Summit conference in Brooklyn, New York. “Tether is somewhat important to our ecosystem because it’s used by different institutions to effect more fluid trading. There are other price-stable tokens out there -- many others -- and I think they’re going to gain traction because of this. I think that will be a really good thing.”

New York’s attorney general accused Tether and Bitfinex last month of participating in a cover-up to hide losses of about $850 million. The allegations revived doubts over the stability of the Tether stablecoin, which is one of the world’s most widely traded virtual currencies. Tether has since disclosed in filings that its stablecoin is backed by cash and short-term securities equal to 74% of the outstanding coins, a striking admission given that the company had previously claimed each was backed by a dollar.

It also isn’t the first time regulators have looked into impropriety by Tether or Bitfinex, which share management. The U.S. Justice Department is investigating whether traders used the Tether stablecoin to manipulate the price of Bitcoin, Bloomberg reported last year, and the U.S. Commodity Futures Trading Commission sent subpoenas to Bitfinex and Tether in late 2017.

“All prices on the planet are being manipulated,” said Lubin. “Any time that well-resourced actors can get in there and do something, you have to expect them to do that. So we need to build better systems.”

The crypto world is reeling from a number of such recent allegations. But the accusations haven’t been able to derail the price trajectory of some of the largest digital assets, which are recovering from a meltdown that saw Bitcoin, for instance, lose more than 70% of its value in 2018. Prices have recovered significantly since the beginning of the year.

“The status of things is great,” said Lubin. “Since that price correction, the system has grown enormously because the people who build the systems, who were pulled in by excitement driven by price growth, stay in the system. Once you’ve seen the potential, you can’t un-see it.”

To contact the editors responsible for this story: Jeremy Herron at jherron8@bloomberg.net, Dave Liedtka, Andrew Dunn