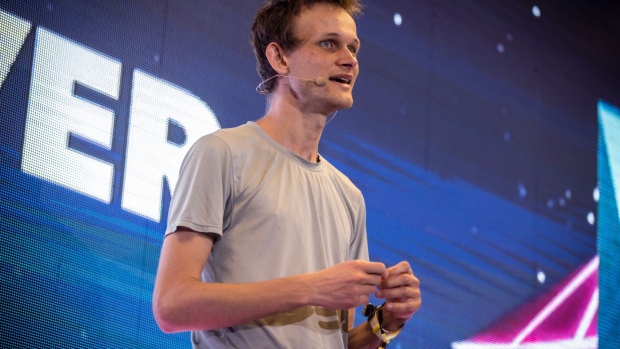 Vitalik Buterin, co-founder of Ethereum, speaks during ETHDenver in Denver, Colorado, U.S., on Friday, Feb. 18, 2022. ETHDenver is the largest Web3 #BUIDLathon in the world for Ethereum and other blockchain protocol enthusiasts, designers and developers. , Bloomberg

(Bloomberg) -- A much-anticipated software upgrade of the Ethereum blockchain, known in crypto as the Merge, is now likely to happen around Sept. 15, according to network co-founder Vitalik Buterin.

The Merge represents a transition in how Ether tokens are minted and transactions are validated, away from mining blocks using complex computational puzzles under the proof-of-work method and toward proof-of-stake. Under the POS method, Ether holders can sign up to validate transactions on Ethereum based on stashes of locked up tokens.

Following a final test stage of the Merge known as Goerli earlier this week, Buterin said the proof-of-work version of Ethereum now only has a rough “fixed number” of mining slots. This means developers can be more certain about when the official network upgrade might begin.

A previous forecast set a date between Sept. 15 and Sept. 20. There is another call between Ethereum developers next week to hammer out any last-minute hiccups to the Merge, at which a definite date will be settled upon.

Tokens developed by other teams to capitalize on the Merge have soared over the last month as the upgrade edges closer. Ether has jumped 80% in the same period.