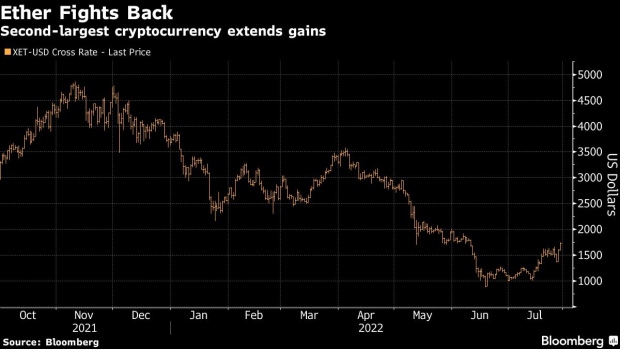 (Bloomberg) -- Cryptocurrencies rallied for a second day, with Ether-related tokens leading gains, as risk aversion eases and optimism grows about the long-anticipated software upgrade of the blockchain network.

Ether, the native token of Ethereum, jumped as much as 9.5%, and has surged as much as 27% on an intraday basis since Tuesday, the biggest two-day gain since January 2021. The digital token is still down more than 50% this year.

The rally signals growing confidence that Ethereum’s move from the current system of using miners to a more energy-efficient system using staked coins is nearing. The switch to this so-called proof-of-stake system is expected to take place in September. This week, Ethereum developers have signaled continued progress in testing the new system, and they are holding a series of events for prospective stakers and other community members in the coming weeks.

“The Ethereum merge will turn the protocol into a proof-of-stake chain and provide more utility for the token, changing the tokenomics, and providing excitement for further decentralization for Ethereum going forward,” said Paul Veradittakit, a partner at Pantera Capital.

Work on the Merge has been going on for years, and it’s been delayed many times. It was most recently expected to take place in June, but was delayed once again.

Meanwhile the broader crypto market continued to benefit from traders dialing back wagers on Federal Reserve hikes after an ugly economic reading fueled concern about a US recession.

“Market is outperforming right now on macro outlook,” said Katie Talati, director of research at Arca. “Many are now speculating that the Fed will take a more dovish stance and will slow any further rate hikes for this year.”