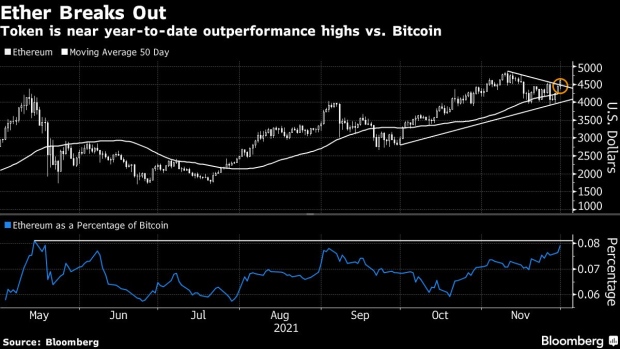 (Bloomberg) -- Ether is outperforming Bitcoin by the greatest amount this year since the native token of the Ethereum network was launched in 2015 as an alternative to the original cryptocurrency.

While both set record highs this month, Ether has gained about 530% since December, compared with a doubling in value by Bitcoin, widening the performance gap between the two by more than 400 percentage points. Bitcoin’s market value is still almost double that of Ether at about $1.1 trillion, according to data from CoinMarketCap.com.

The largest difference between Ether and Bitcoin is that the former is seeing much greater association with ancillary growth sectors in crypto, including DeFi, non-fungible tokens and the so-called metaverse, said Stephane Ouellette, chief executive and co-founder of crypto platform FRNT Financial Inc.

“The current BTC trading window seems to associate the asset more with global currency trends, inflation hedges, etc.,” he said, adding “while ETH has, at least from a current market perception standpoint, higher correlations with the growth of crypto sub-sectors.”

Ether underpins the Ethereum network, the dominant blockchain used for thousands of decentralized applications, which has seen an uptick in usage and popularity this year. Plus, it underwent an upgrade that was expected to help make it faster and more scalable.

The token is making a run toward record highs once again, a rally whose trek was upended at the end of last week amid wider risk-asset turmoil. But after it bounced off its 50-day moving average on Monday, Ether has broken out to the upside and has advanced around 13% since Friday.

Ether rose as much as 4.9% Tuesday to around $4,671. Last week, investors bought roughly $23 million of Ether, marking its fifth consecutive week of inflows, according to data compiled by CoinShares, a digital-asset manager.

Ether has outrun Bitcoin in all but four months so far this year and is closing November with a second straight month of outperformance. Right now, one Ether is the equivalent of about 8% of a Bitcoin.

Bitcoin was little changed at about $58,243 on Tuesday, down from a record high of almost $69,000 earlier this month.

“I don’t want to get too excited about this move too quickly. However, Ethereum has been outperforming Bitcoin over the past month,” said Matt Maley, chief market strategist for Miller Tabak + Co. Should it break out above its mid-November highs while Bitcoin continues to sit below both its mid-November and its April highs, it will show that Ether has become the new crypto of choice for most investors, he added.