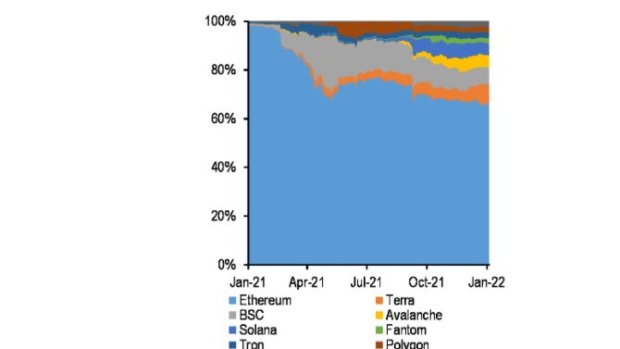 (Bloomberg) -- Ethereum’s dominance in one of the hottest corners of cryptocurrency is at risk of being further eroded as competitors push deeper into decentralized finance, according to JPMorgan Chase & Co.

Until the final phase of Sharding, which JPMorgan described as the “most critical” development for scaling the Ethereum network, arrives in 2023, the network’s 70% market share in DeFi could continue to drop, analysts led by Nikolaos Panigirtzoglou wrote in a note Wednesday.

The “optimistic view about Ethereum’s dominance is at risk,” Panigirtzoglou wrote. Scaling, “which is necessary for the Ethereum network to maintain its dominance, might arrive too late.”

Ethereum has been a dominant force in crypto for several years now, and its Ether token is the No.2 cryptocurrency behind Bitcoin by market value. But its share of total value locked in DeFi, which was nearly 100% at the beginning of 2021, fell to around 70% over the course of year, JPMorgan said.

Waning enthusiasm for the Ethereum blockchain could dent the price of Ether, which has more than doubled in the past year.

Panigirtzoglou added that a “rather problematic” aspect of the situation for Ethereum is that it’s losing market share mostly to other independent blockchains, rather than those that rely on Ethereum’s own Layer 1 network for their security.

Ethereum competitors that are gaining the most market share -- like Terra, Binance Smart Chain, Avalanche and Solana -- have been receiving large amounts of funding and using incentives to boost usage in their own ecosystems, JPMorgan said. So it’s possible that competitors’ ecosystems will have grown so much that activity won’t return en masse to the Ethereum network after its scaling is completed.

“In other words, Ethereum is currently in an intense race to maintain its dominance in the application space with the outcome of that race far from given, in our opinion,” according to the note.

Ether’s price has risen about 220% in the past year, while Solana is up 7,000% and Avalanche 2,200%, according to pricing from CoinGecko. While far outpaced by its smaller rivals, Ether has still comfortably outperformed Bitcoin.